Brahms himself declared that his first symphony, from sketches to finishing touches, took 21 years, from 1855 to 1876. Brahms was extremely self-critical and destroyed many of his early compositions. On a second but not secondary note, there was the big shadow cast by Beethoven. Brahms often felt he could not measure up and take Beethoven’s inheritance.

The final structure of the symphony most likely took form around 1868. Brahms ended up using in the outer movements the quintessential form of classicism, the sonata form: a structure based on an exposition with 2 contrasting themes, a development, and a recapitulation. Everything framed by an introduction and a coda.

In September 1868, Brahms sent a card to Clara Schumann sketching the Alphorn tune which would emerge in the symphony’s Finale, along with the famous message

“High on the hill, deep in the dale, I send you a thousand greetings! Thus blew the shepherd’s horn today!”.

As with the first movement, Brahms begins with an introduction in C minor. The grandiosity of the musical gesture gives us a taste of what’s to come.

Three descending notes in the low strings and the contrabassoon open the doors to an anticipation of a theme we will recognize a little later. The atmosphere is dark and ominous and the drama is exacerbated by the timpani roll in crescendo to a fortissimo. Notice also the swells in the second and third bar 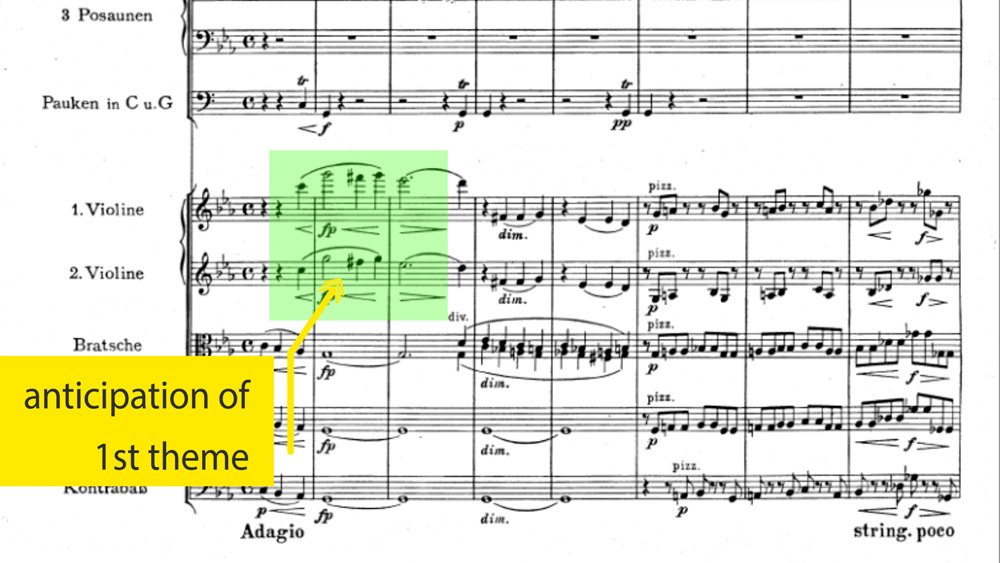 The music becomes tentative: the strings in pizzicato tip-toe around each other. Things get more exciting through a crescendo and stringendo.

And we’re back to square one: the three descending notes are now in the hands of the woodwinds while the ominous anticipation of the future first theme goes to the violins and violas 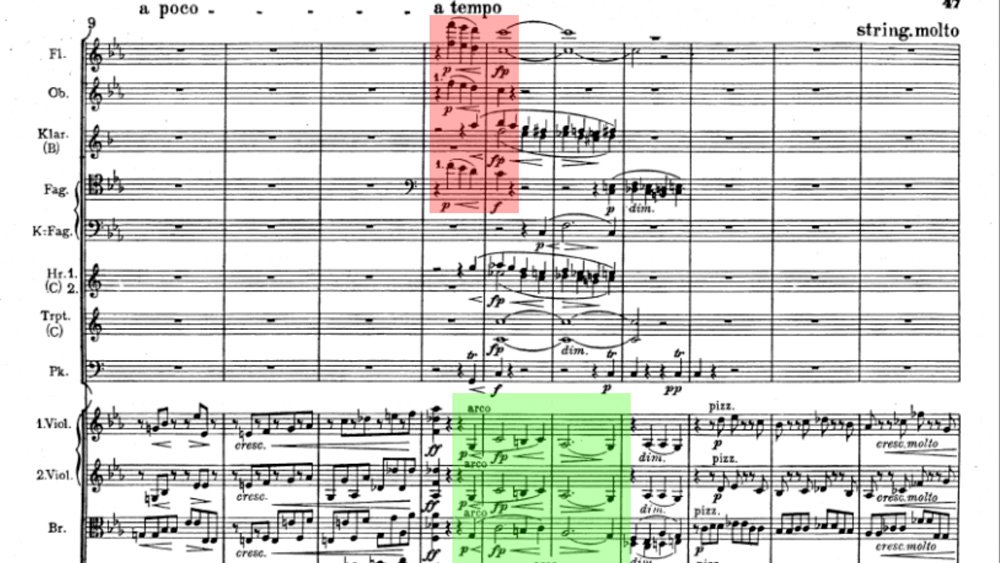 The pizzicato returns, shortened, leading to another reprise of the first three notes. The answer in the ascending scales of the violas and cellos is transformed in the section the follows. This is quintessential Brahms, transforming the same material over and over again. 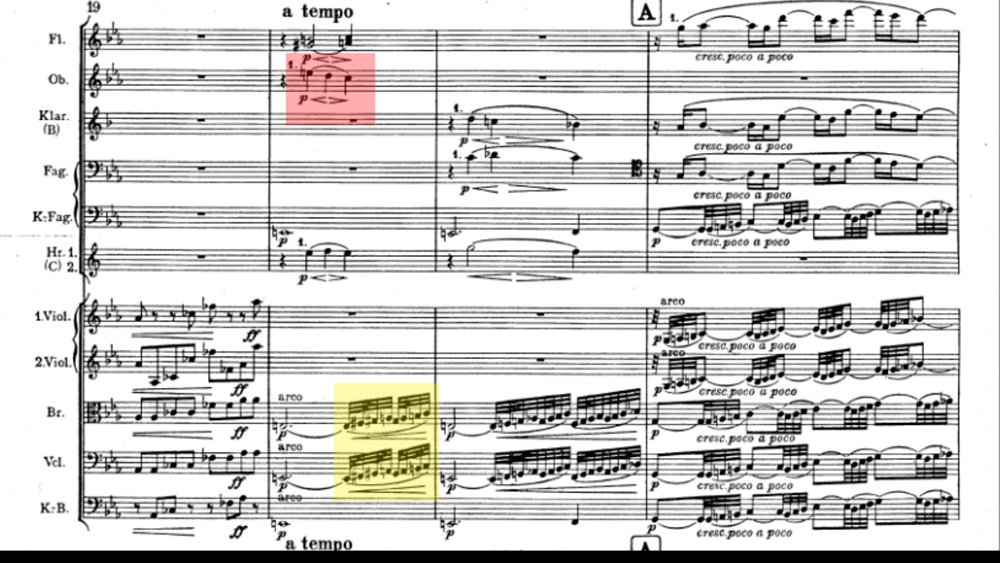 The scales increase the temperature climbing up high only to be disrupted and fall down again and then again. The final bars of this adagio explode in timpani roll leading to a Più’ andante 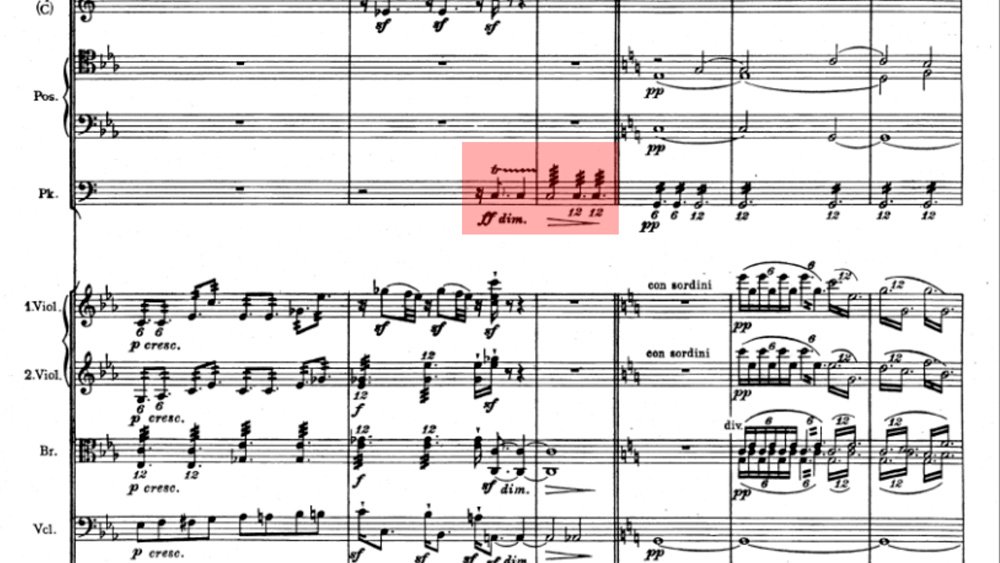 The first theme, broad, grandiose, is introduced by the violins, playing on their lowest string, conferring a warm tone to it. The violas counterpoint while the horns gently sustain the harmony. The rhythmic engine is left to the pizzicato of the cellos and double basses 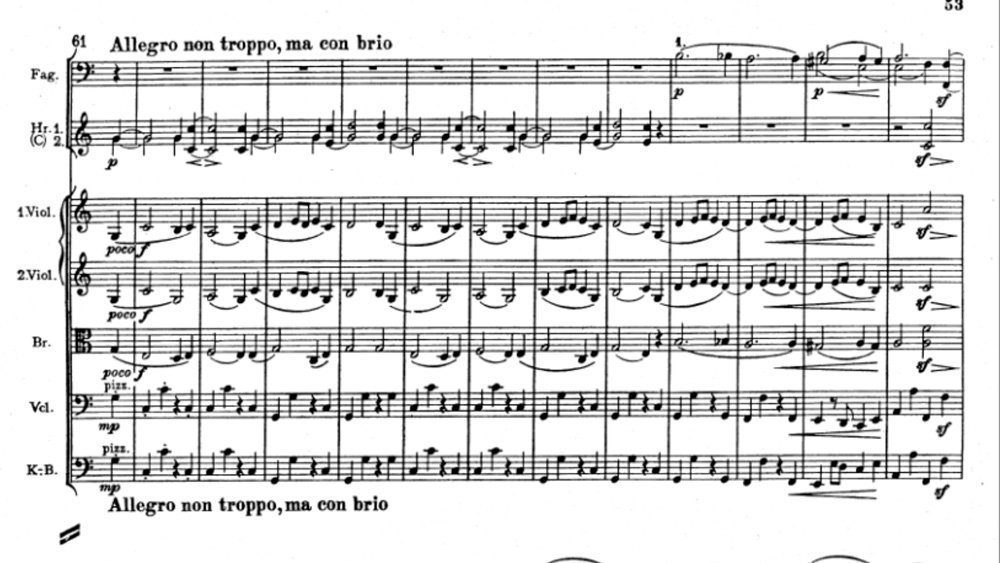 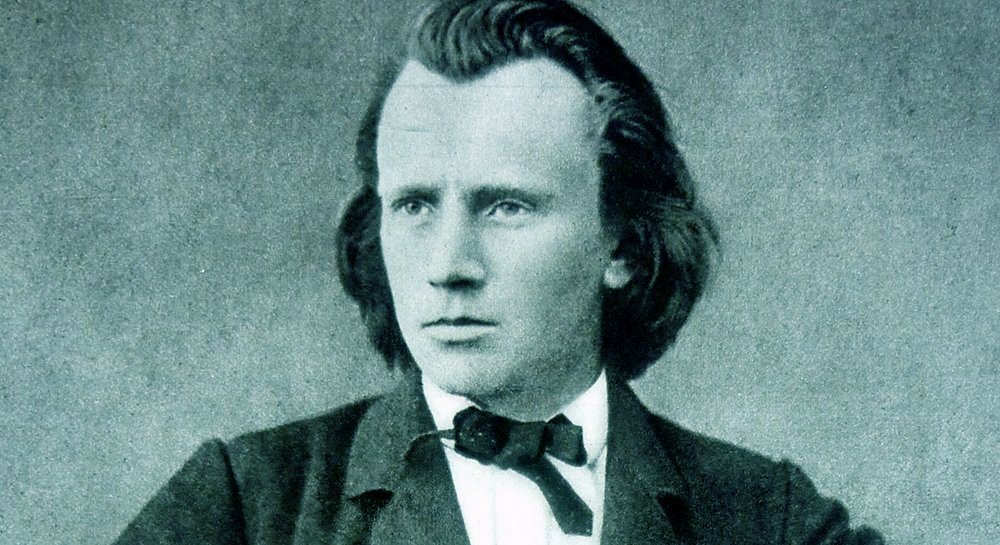 The theme is passed to the woodwinds and the texture enriched by the timpani, moving with the pizzicato of the low strings; it is subsequently retaken a third time by the full orchestra, which begins its disruption. The eternal presence of conflicts, which we’ve seen so much of in the first movement, returns here as well, for a brief moment. 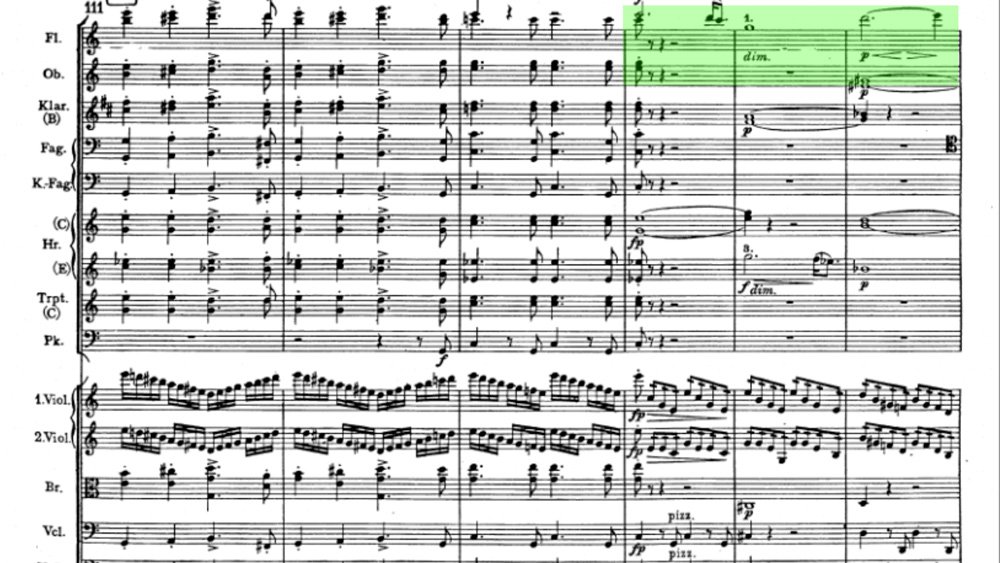 The second theme is strictly related both to the very opening of the movement (in its descending figure) and to the Alphorn tune. Again, the strings introduce the theme and are shortly joined by the woodwinds 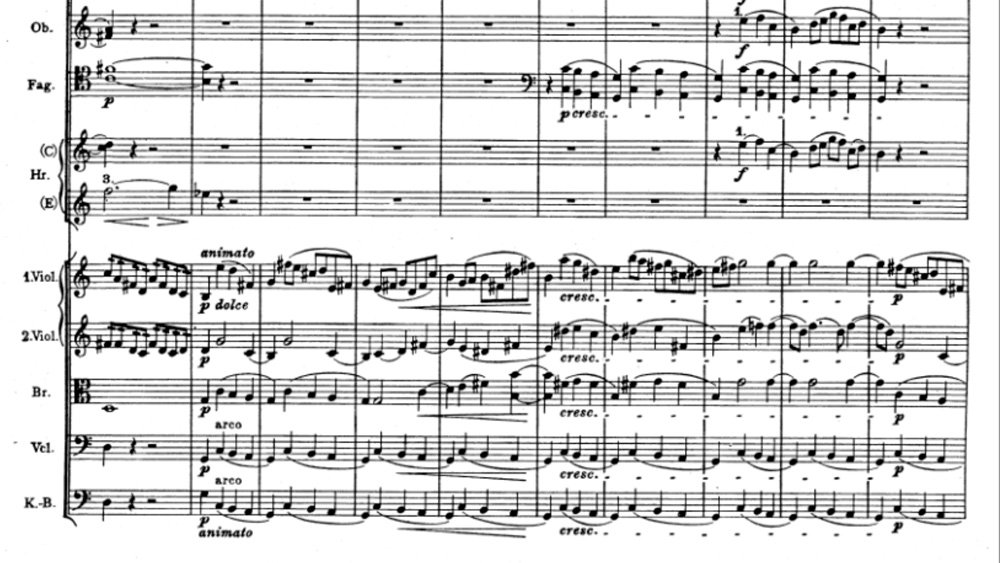 An energetic transitional passage shows once more the inner conflicts and then the oboe continues. What might seem a new element, is, in fact, an inverted variation of the same theme.

The exposition continues with a series of conflicts and their resolution, in a constant shift of dynamics and orchestration. The rhythm intensifies the action, turning to triplets which gradually take over 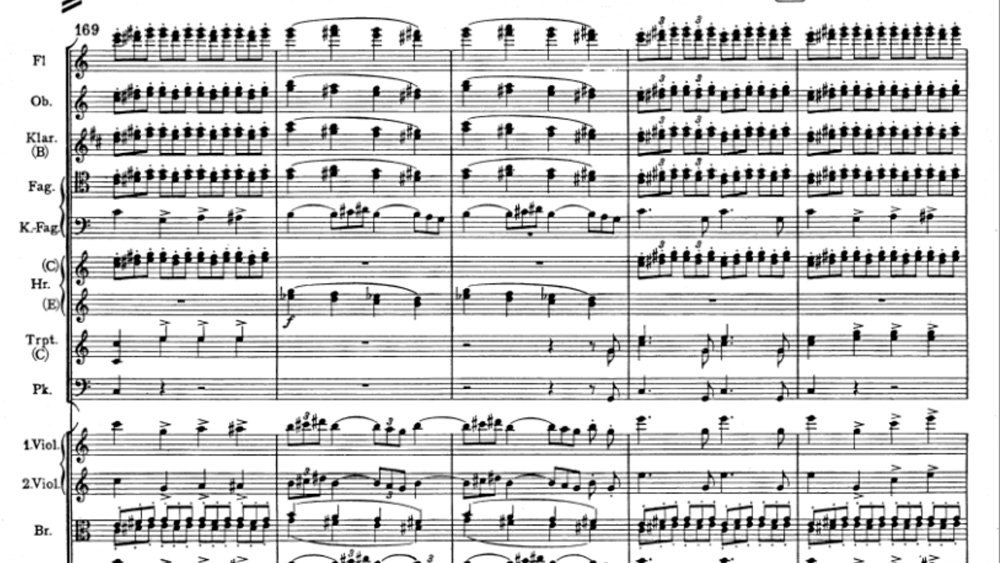 Oddly enough, we end up on the relative minor of G major, E minor, concluding the exposition.

The development section begins with a full restatement of the first theme; this is the last time that this theme is presented in its entirety. The woodwinds punctuate the theme, played by the violins, while the counterpoint of the violas is now doubled by the cellos. 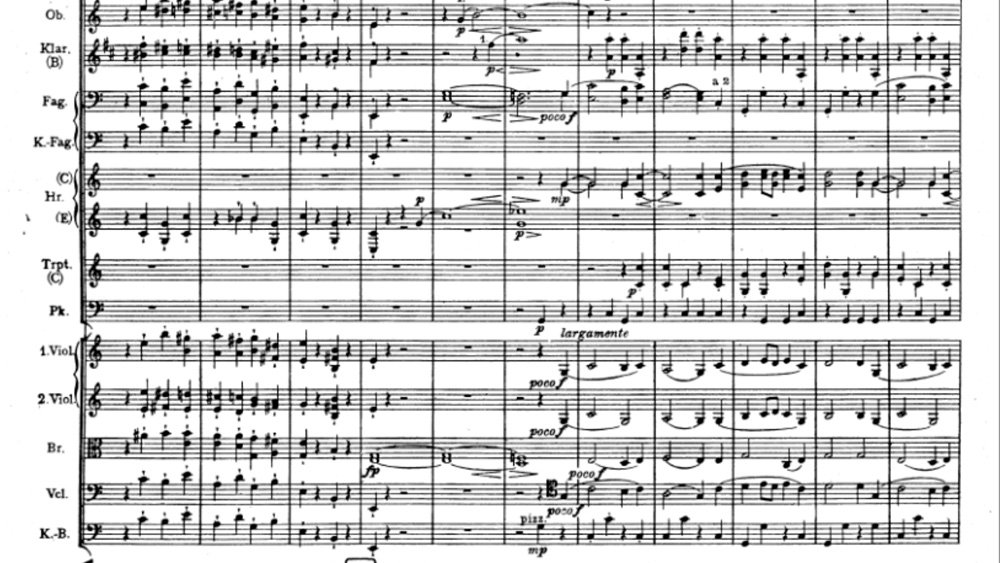 The oboe leads the transition to Eb major, where the woodwinds try to take the theme from the strings. But the conversation is immediately interrupted by the pizzicato of the strings, strictly related to the pizzicato in the first bars of the introduction. 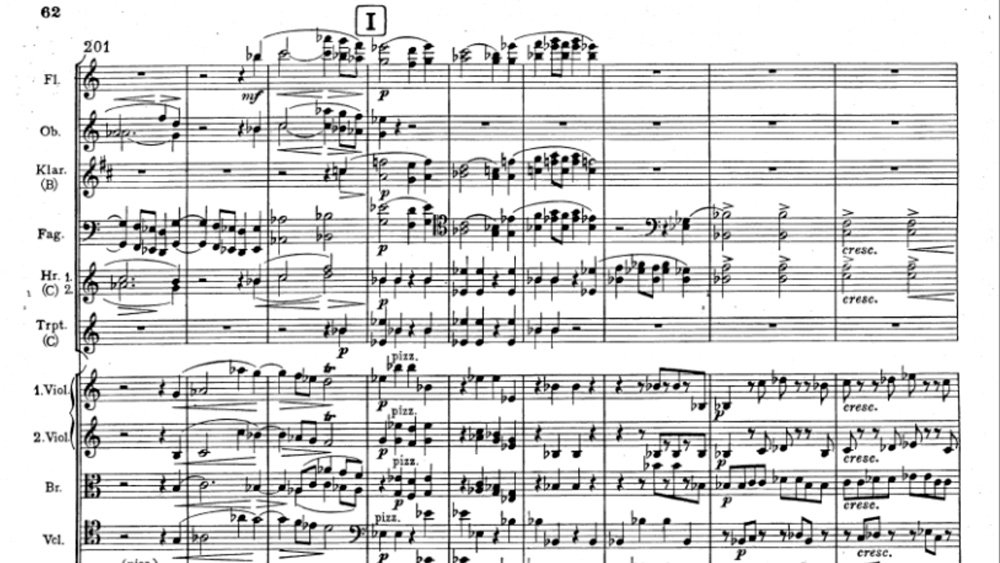 The entire development is actually a combination of both development and recapitulation, mixing up themes and sectional parts and leading directly to the coda.

The first theme pops up in forte but it’s immediately disrupted landing on the conflict area we heard in the exposition which led to the second theme.

Only, the conflict here is not resolved right away but keeps growing and growing through a series of modulating passages. We’re reaching the climax: the Alphorn theme is transformed in a very dramatic sequence 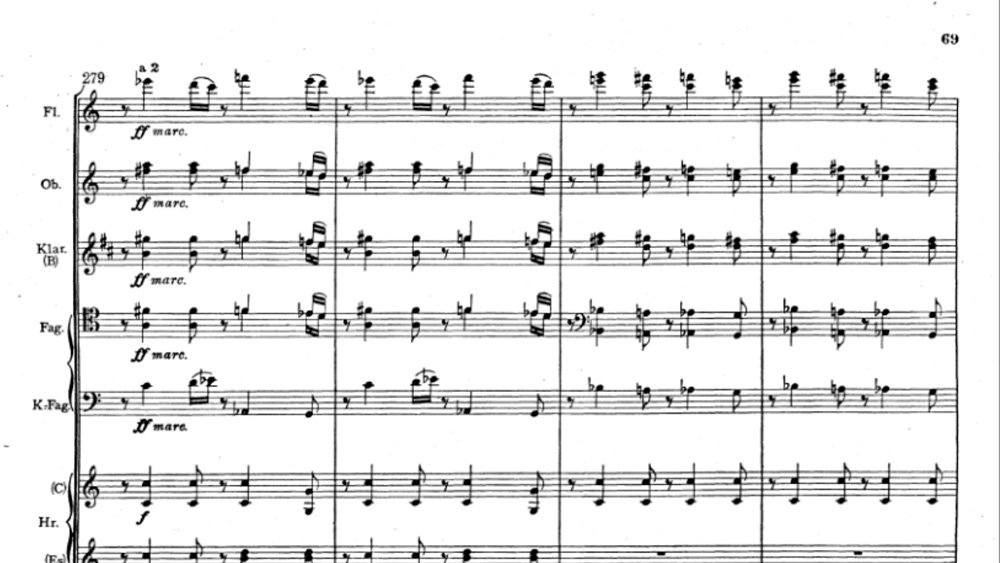 finally exploding a full orchestra fortissimo, where the serenity of the C major is gradually restored. Notice the triplets of the timpani reminding of the opening of the first movement of the symphony 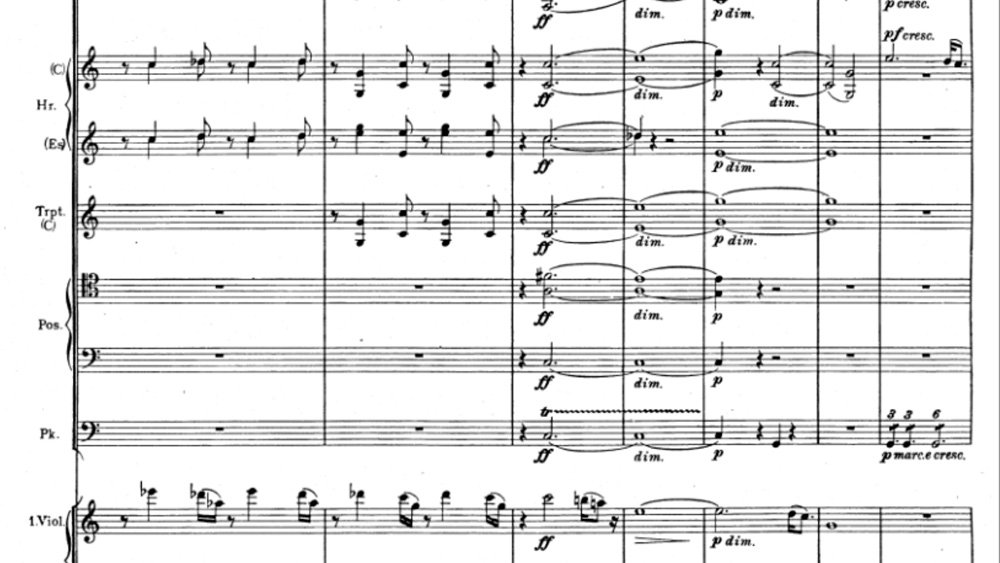