The Coriolan Ouverture could be defined as a miniature symphonic poem, in that it has an inherent descriptive character (much like the Egmont Ouverture). Both of them, as a matter of fact, are overtures to a theatrical drama: Collin’s Coriolan, and Goethe’s Egmont.

Beethoven’s idea is clearly to feature all the characteristics of the drama in a single, compact symphonic piece. Collin’s drama is rich in contrasting tensions, which offers Beethoven a perfect opportunity to showcase his own personality through music. Beethoven also effectively started a genre that will see much success in the first half of the 18th century: up until then, an overture was used to open an opera; with Beethoven, we see the ouverture as a standalone concert piece. This idea will be followed by many composers, like Mendelssohn, Berlioz, and Brahms. Not only: this idea will also be the germ for another form, the symphonic poem that from Liszt onward was destined to much success. The very same 1st movement of Mahler’s second symphony, in fact, was born as the symphonic poem “Totenfeier“.

The drama of Coriolan turns around the tragedy of the roman hero who defeated the Volsci but was then exiled from Rome; in order to take revenge against Rome, he forms an alliance with the Volsci themselves. When he’s about to attack Rome, his wife and his mother enter his tent and manage to convince him to desist. Depending on the version of the story (Collin, Shakespeare, Plutarch) Coriolan either kills himself or is killed by the Volsci. 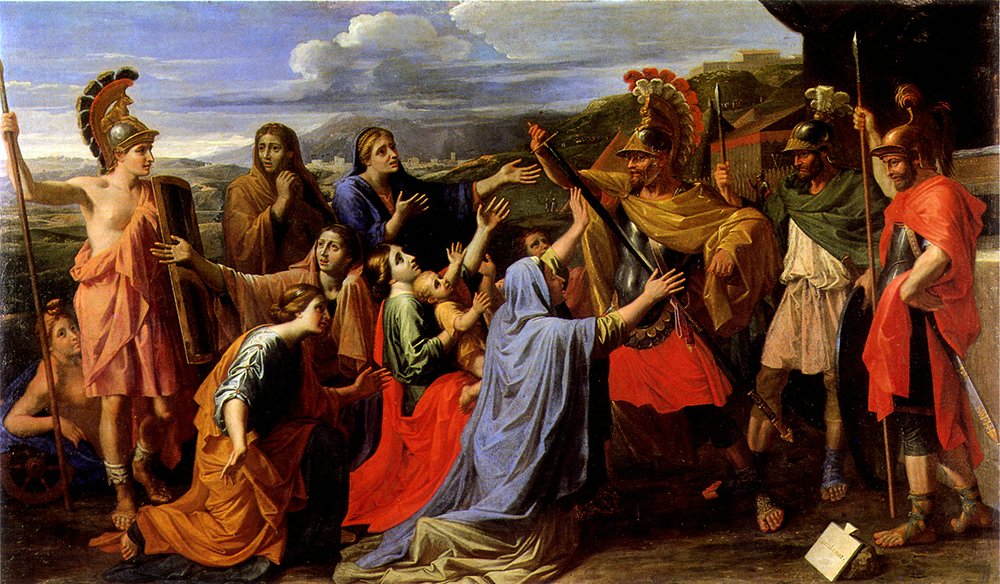 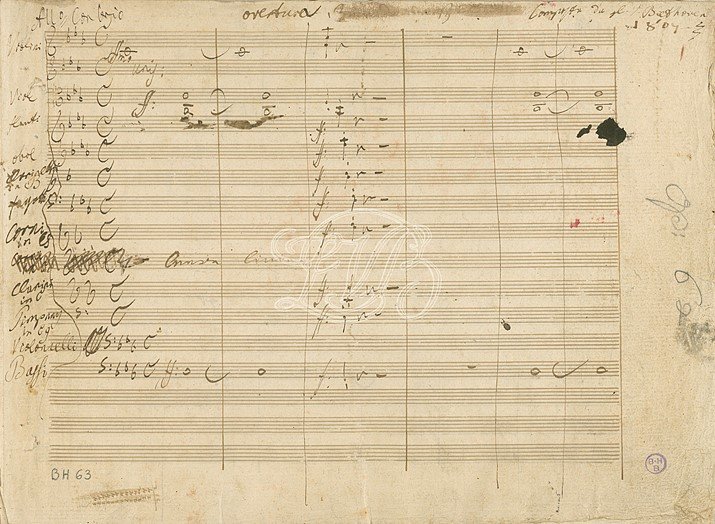 The dualism of the character, fighting his own internal contrasts of love and revenge for Rome, is the starting point for Beethoven. The Coriolan Ouverture begins with a dramatic gesture of a long note in the strings, followed by full orchestral chords. This incipit is repeated 3 times: 3 times in which Beethoven changes only the chord, adding more and more drama to it, amplified by the use of the rests. 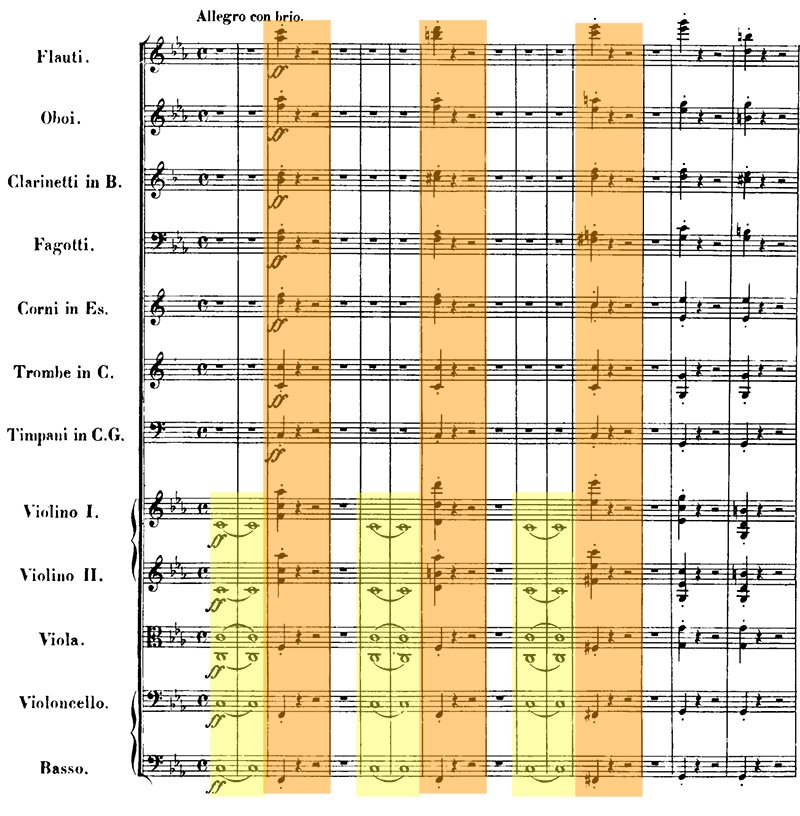 Avoid using both hands all the time: swap between one and the other thinking about the weight you want to impress on sound. The last 2 chords can also be conducted sideways, with a sharp, quick rebound of your right hand, leaving the left in position for the piano at bar 15.

After a cadenza of 2 chords, we would expect another fortissimo chord in the home key. But Beethoven doesn’t fulfill this expectation, introducing a sudden pianissimo. It’s typical of Beethoven to change the dynamics to keep the tension. Notice how Beethoven does not use any melodic element in the first 14 bars but relies exclusively on harmony and rhythm. In full contrast, when the first theme comes in on bar 15 there is no harmony: only a C on the downbeat of the first 3 bars. Sure, one could argue that the harmony is somewhat implicit, something we can deduct with our ears accustomed to disentangle the intricacies of Bach, a composer that was completely unknown to the audience at that time. Regardless, Beethoven does not make it obvious, leaving the violins and violas completely unaccompanied. 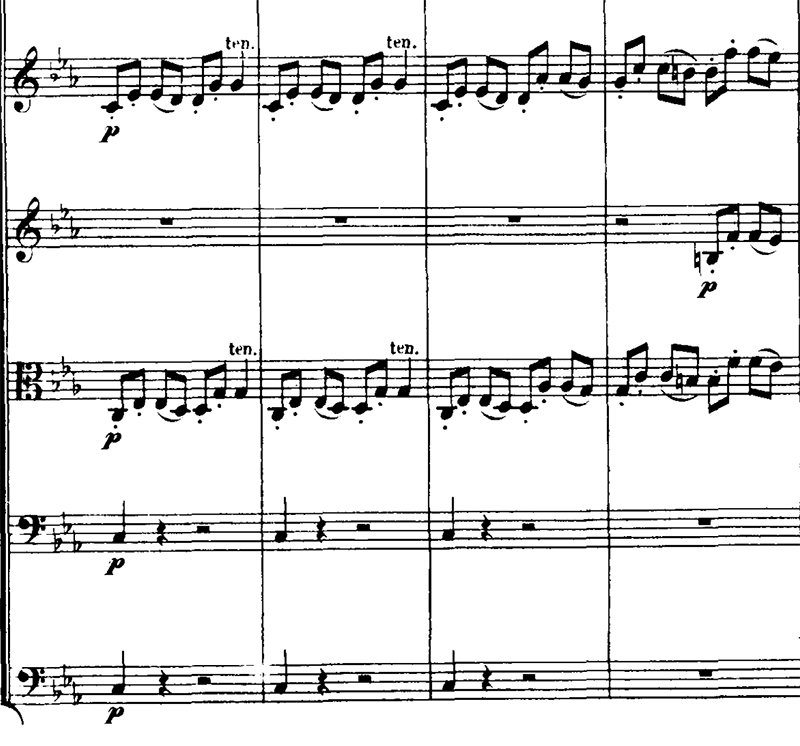 Everything is in piano, no change in dynamics for 4 bars where only the melody reigns. The absence of dynamics makes the contrast with what came before and with what is about to come even more extreme. The menacing chord from the opening comes back once 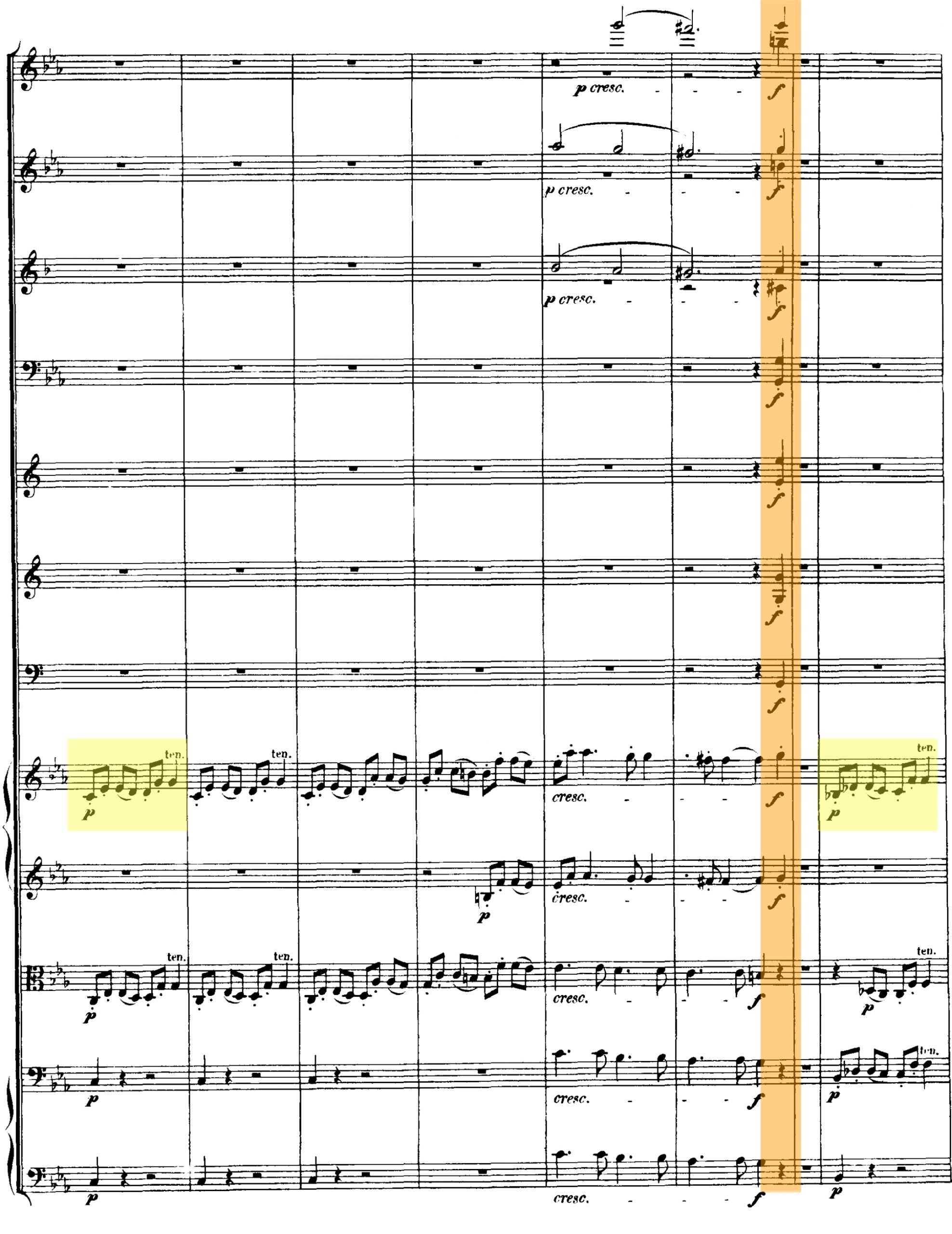 then the conversation is passed again to the strings, playing the same theme a whole step lower.

If you want to emphasize the last chord of bar 20, retake the stroke with a short and clean gesture, stopping the rebound.

Beethoven uses the same musical cells to continue, arriving at a fortissimo which holds another Beethovenian fingerprint: those dotted quarter notes in the winds and lower strings are an element that we will find over and over again, one remarkable example being his ninth symphony.

The motive we heard at bar 15 is disrupted in a rhythmical cell, also changing position within the bar, going from the downbeat to the 3rd quarter, and backward to the 2nd quarter of the bar. 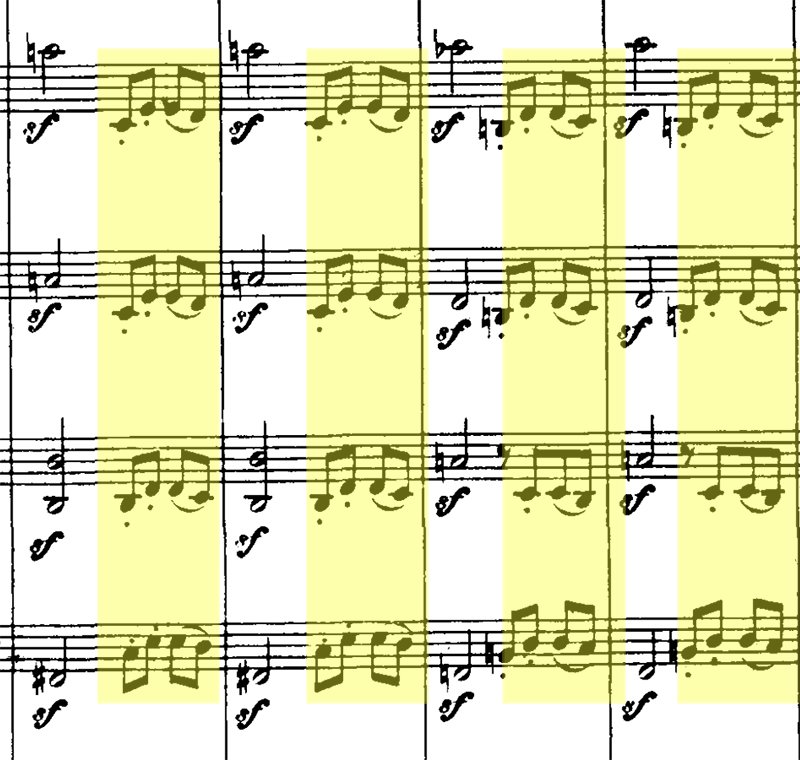 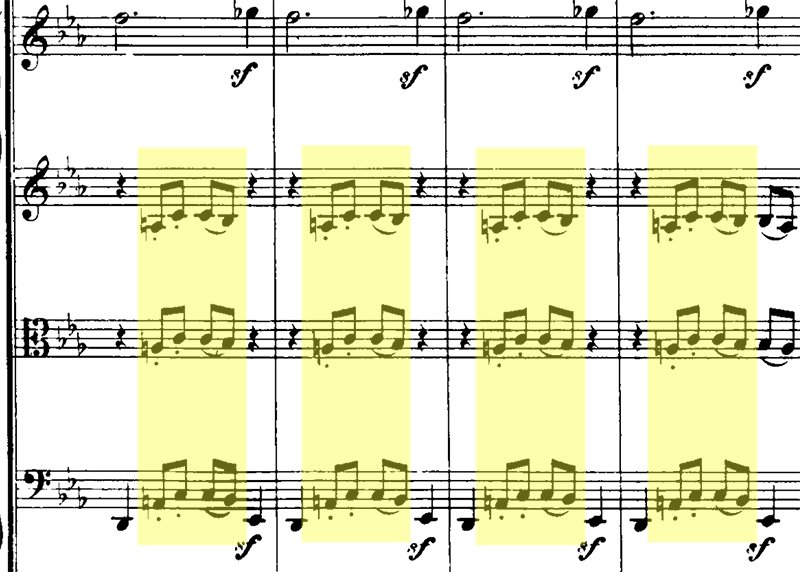 Notice how Beethoven insists on the same musical gestures, symbolizing the doubts weighing on Coriolan. Your strokes on the second beat will need to be heavier than the ones on the first in order to get the most out of those sforzandi.