Presentation of the 4 themes

Known almost exclusively for the Sorcerer’s apprentice, Paul Dukas had quite an interesting career: he wrote very little music, and at one point he refused to keep writing, getting as far as destroying his own works. We are left with less than 15 compositions, of extremely high quality.

The Sorcerer’s apprentice is a symphonic poem written in 1897 based on a ballad by Goethe, and it’s pretty much all he is remembered for. This, despite the fact that he wrote one of the most beautiful and refined operas of the French repertoire: Ariane et Barbe-bleue. Another gem in his catalog is his symphony which is not performed nearly as enough as it should.

Notoriously, The Sorcerer’s apprentice was used in the Disney cartoon Fantasia. But the great popularity that it got from it also shadowed some of its unique characteristics, such as its structure and its orchestration.

The structure per se is a sonata form, like a movement of a classical symphony.
The sonata form is a structure typical of classicism, and it normally presents an exposition with a first and a second theme, a development section and a recapitulation. Everything is often framed by a slow introduction and a coda.

Here however, we are not going to find the usual 2 contrasting themes, a more masculine first theme, and a more feminine second theme (like we’ve seen in Beethoven’s Coriolan ouverture for instance). Dukas gives us 4 themes, all presented in the slow introduction.

The first theme, quite exotic in its harmonies, will see almost no development, except towards the end

This theme, very fluid in nature, is generally referred to as the “theme of water“: throughout the piece, its function is to connect sections together

Right after, Dukas gives us the second theme, probably the most popular one, announced by the clarinet, then by the oboe, followed by the flute

Presenting the theme slower at the beginning of the piece is a smart composing trick: it allows the listener to get familiar with a fast piece at a slow pace. Exactly like practicing.

This is known as the theme of the magic broom. To keep practicing, the water theme comes back, followed again by the magic broom theme, and then Dukas changes pace.

He gives us the third theme in a new Vivo section (vivo means lively by the way).

This one is the Apprentice’s theme: it’s full of the liveliness and cockiness of youth but also of its naivety.

Stop on the hold before the Vivo and give a very sharp upbeat. Keep it in the wrist and keep your stroke small: it will guarantee clarity and togetherness of the orchestra. 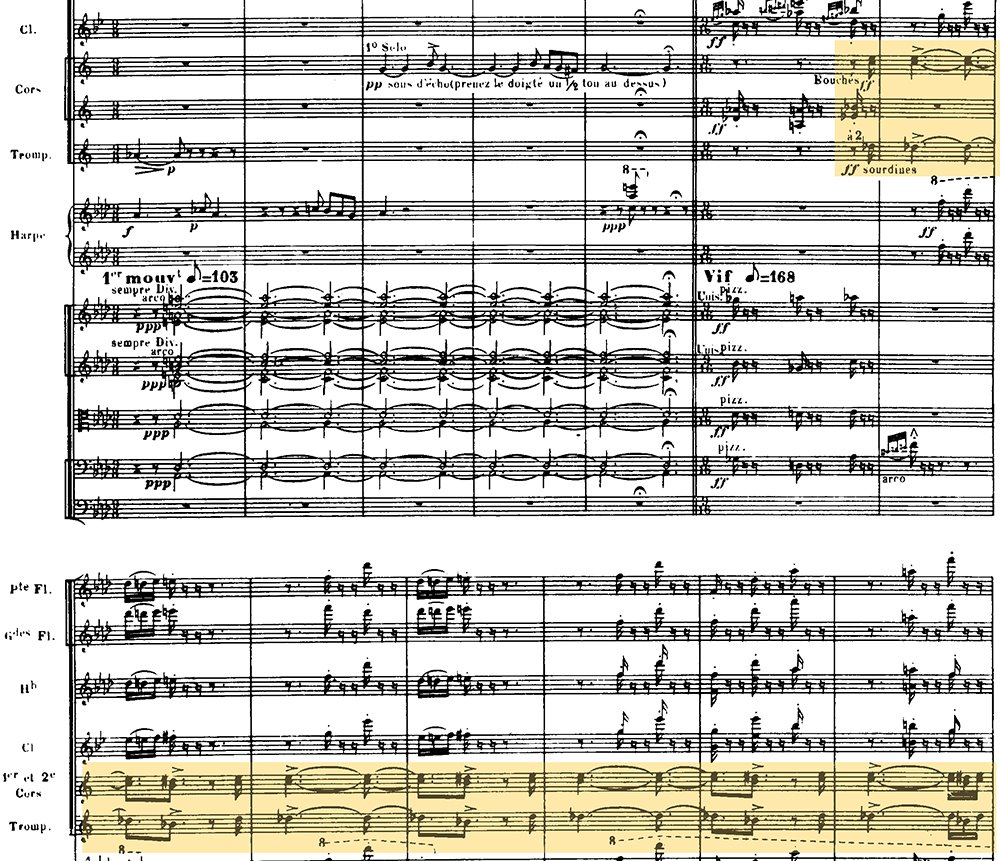 More than a theme this is a motive. It’s a call: every time the Sorcerer will pop through in the story we’ll hear this motive.

Notice how a part of the broom’s theme pops up under the sorcerer’s theme.

The idea of Dukas is brilliant: this is de facto a traditional slow introduction just like the ones we find in the classical symphonies. The musical material is introduced, bit by bit, or theme by theme, and once that’s finished we get into the actual story.

The introduction stops with a timpani strike. Then there’s silence: Dukas keeps the suspense.