Antonín Dvořák moved to the United States in December of 1892 only to return back to his homeland of Bohemia 3 years later. Yet, in those 3 years, he wrote 3 of his most popular pieces: the American String Quartet, the Cello Concerto, and his 9th symphony title “From the New World”.

In Dvořák’s own words, the real meaning of the title is

“Impressions and greetings from the new world”.

“From the New World” was written by Dvořák himself as a joke before sending the autograph to his editor.

It is often said that the “American” aspect of this music comes from the fact that Dvořák embraced the American idioms (musical idioms) infusing his compositions with them. While that is partially feasible, it also poses the question of “what is American music?”, something that Leonard Bernstein brilliantly, as usual, addressed in one of his legendary lectures.

While most American composers of the time considered American folk music somewhat of second rate music, Dvořák went in the exact opposite direction. Faithful to his love for folk music he mixed and matched the “primitive” sound of American folk tunes with the old European symphonic form, creating something that captured people since its premiere.

But how did Dvořák get acquainted with these folk melodies and rhythms? Legend wants that while walking down the hall of the National Conservatory of Music in New York, of which he had accepted to be the director, he heard a young black student singing, while he was working as a janitor to help to pay the costs of his education.

Dvořák was struck by his voice but most importantly by the song he was singing. From then on, the student, whose name was Harry Burleigh,  sang for him many times, and Dvořák immersed himself in the warmth of the negro spirituals. 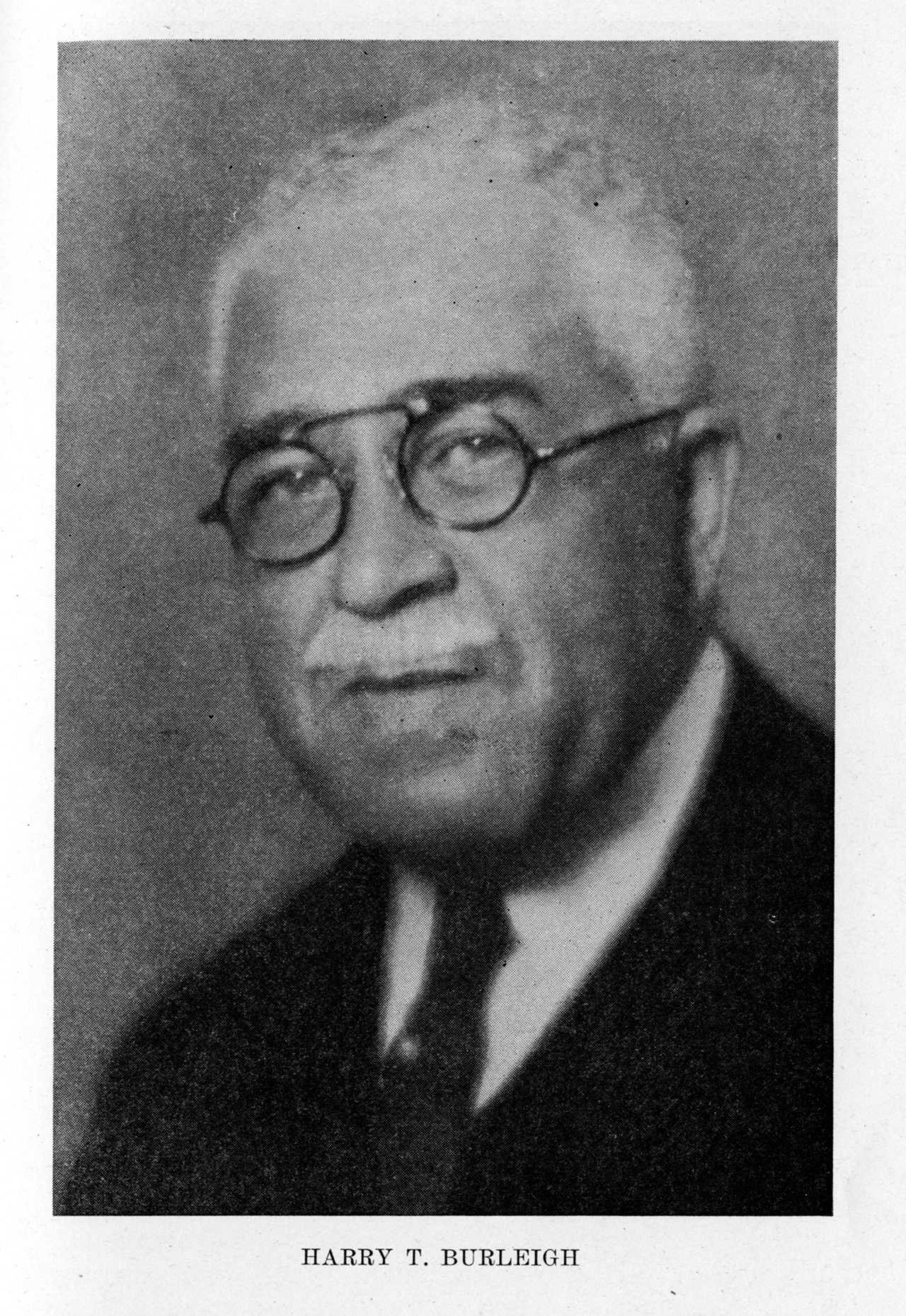 As much as this symphony is imbued with these tunes it remains as classical as it gets in terms of structure. The first movement is in a typical sonata form, with a slow introduction and an Allegro, an exposition with a first and second theme, a development, a recapitulation, and a coda.

As much as he loved America, Dvořák always longed for his homeland: the opening of the symphony presents exactly that in its slow longing theme

interrupted almost immediately by a calling of 2 horns. The scene repeats, changing color from the lower strings to the higher woodwinds, but this time, instead of the horns, we have a shocking and violent explosion of the orchestra. 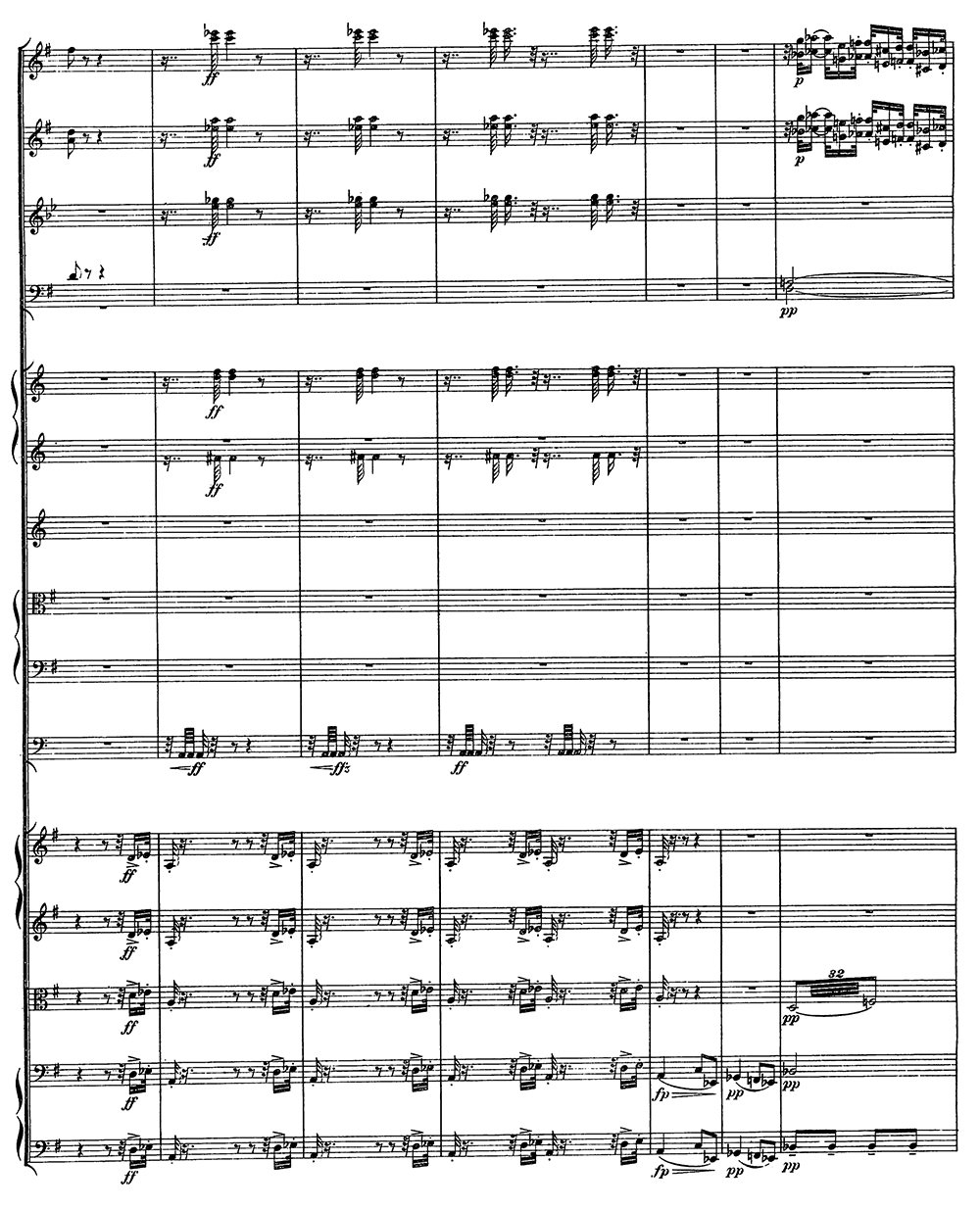 It’s an unexpected moment of very high energy, something the audience of the time would have not expected. As conductors, we should try to preserve the surprise effect by avoiding big and obvious gestures, opting for a more focused and tight stroke, right in front of the body.

This surprising moment lets us know that the quiet is already gone. The syncopations of the woodwinds introduce the thematic cell, based on the pentatonic scale, that will be the base for the entire movement.

Many people have pointed out that this is the first hint towards American folk music, in virtue of that same pentatonic scale, largely used by traditional American music. However, the pentatonic scale had already been in use in many other parts of the world. Without going too far, in Bohemia for example, Dvořák’s home country. Not to forget that Debussy, in the same period, had started toying with it drawing inspiration from the Indonesian Gamelan orchestra he had listened to in Paris.

This introduction ends with a succession of syncopations, diminished seventh and timpani strikes that are remarkably similar to the end of the introduction of the last movement of Brahms’ first symphony. And, as we know, Brahms was one of the first to endorse Dvořák’s compositional genius. 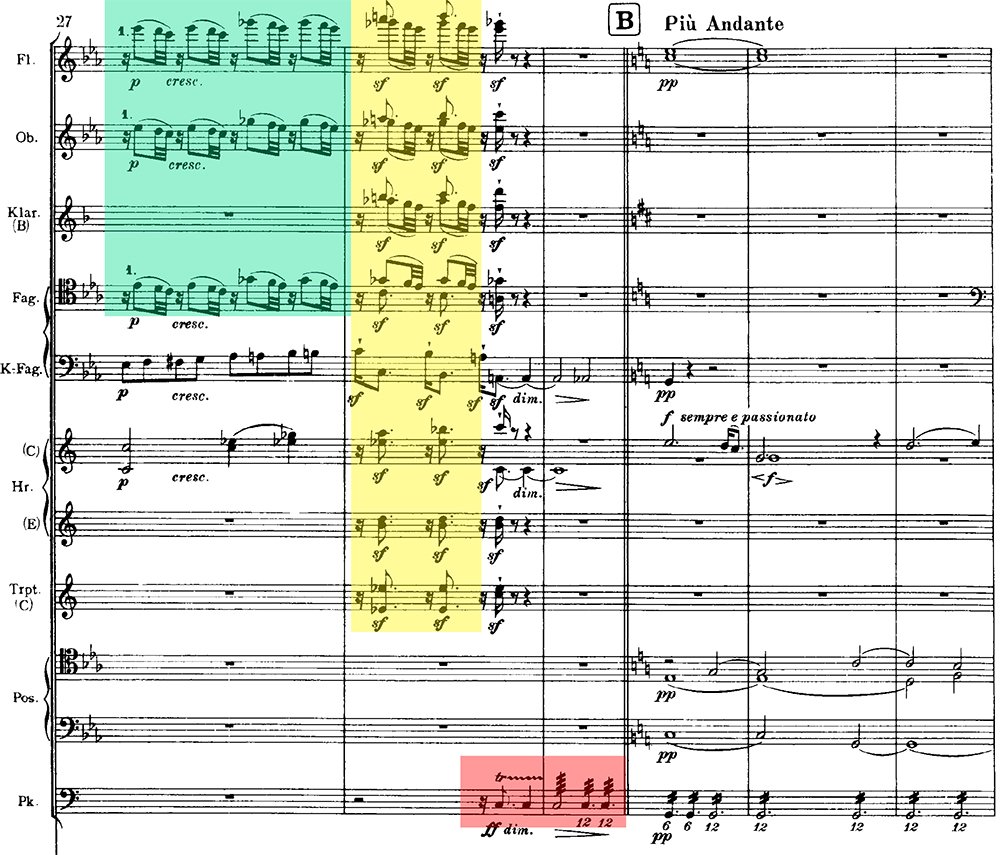 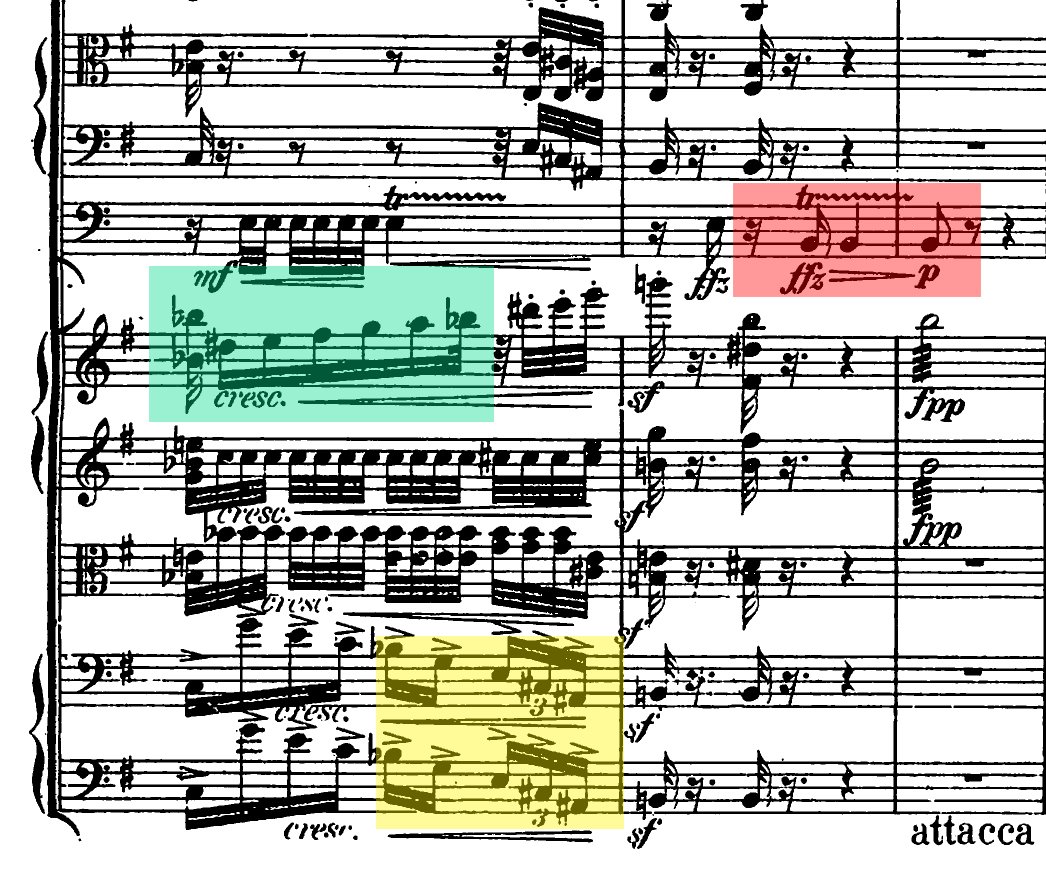 We’re driven into the Allegro where the first theme is rich of the typical Dvořák’s melodic invention, played by those same 2 horns that had that “calling” moment in the very beginning (the third and fourth horn) and then flowing naturally from one section to another 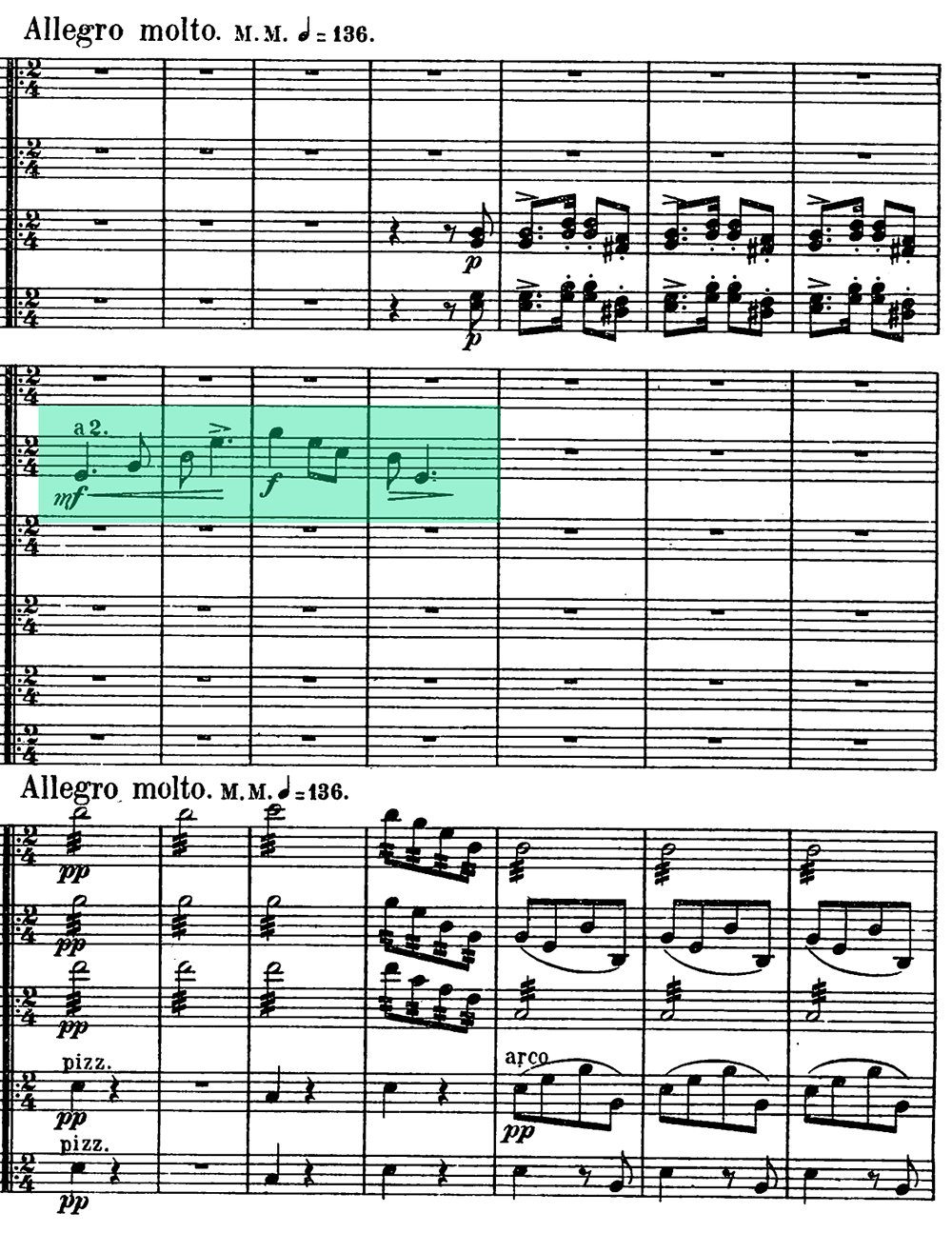 On the 5th bar of the Allegro keep the accents of the woodwinds within the piano sonority, and notice that they have no dots on top.

We drive into an explosion of energy: the first theme is played by the bassoons, trombones, and 2 horns, on top of cellos and basses while the rest of the orchestra responds with the rhythmic elements.