The sources of the Moldau

The Vltava flows broadly there

“The composition describes the course of the Vltava, starting from the two small springs, the cold and hot Vltava, up to the unification of the two branches in a single flow; the course of the Vltava between woods and meadows, along with peasant weddings, and dances of nymphs in full moon nights: on the nearby rocks that form the basis of ruined castles and palaces. The Vltava swirls around the rapids of St. John and then widens and flows towards Prague, passes under the Vyšehrad and then vanishes majestically in the distance, ending its course in the Elbe”

With these words, Smetana describes his most popular work. The Moldau is a symphonic poem part of a symphonic cycle titled “Má vlast“.

It was performed in full for the first time in Prague on November 5, 1882, two years before the death of the composer, who had long since been completely deaf.

While it is often presented as a single work in six movements the individual pieces can be performed as individual works. 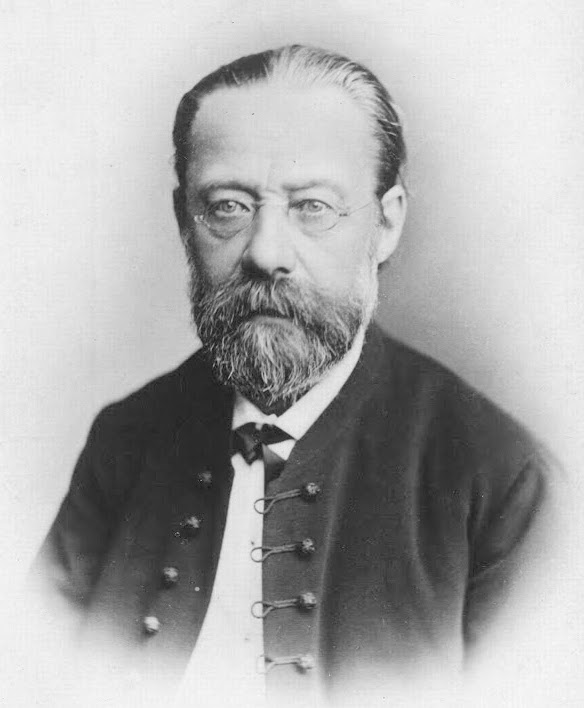 Smetana combined the form of the symphonic poem, introduced by Liszt, with the ideals of nationalistic music that were in vogue at the end of the 19th century.

However, curiously enough, the main theme of The Moldau is not originally from Bohemia: it comes from the motif of the popular Italian Renaissance song Il ballo di Mantova (also known as “Fuggi fuggi fuggi“), which the mercenary troops raiding Italy (before it became Italy) in the numerous conflicts of the ‘500 and’ 600 spread throughout Europe.

From here it entered the Slavic folk traditions, from which Smetana drew the main theme of the Vltava. It reached the Jewish musical tradition as well becoming part of the national anthem of Israel in 1948.

Smetana: an analysis of the Vltava (The Moldau)

The sources of the Moldau

The structure of the piece is what essentially Smetana outlines in his description of it. Which, by the way, you can find printed in the score.
The symphonic poem begins with the first of the 2 sources, with a wavy figure in the flutes.

Notice also the tempo marking: Allegro comodo non agitato which means comfortably and without agitation. And notice also that wonderful touch of color with the pizzicato of the violins, like little sprinkles of water 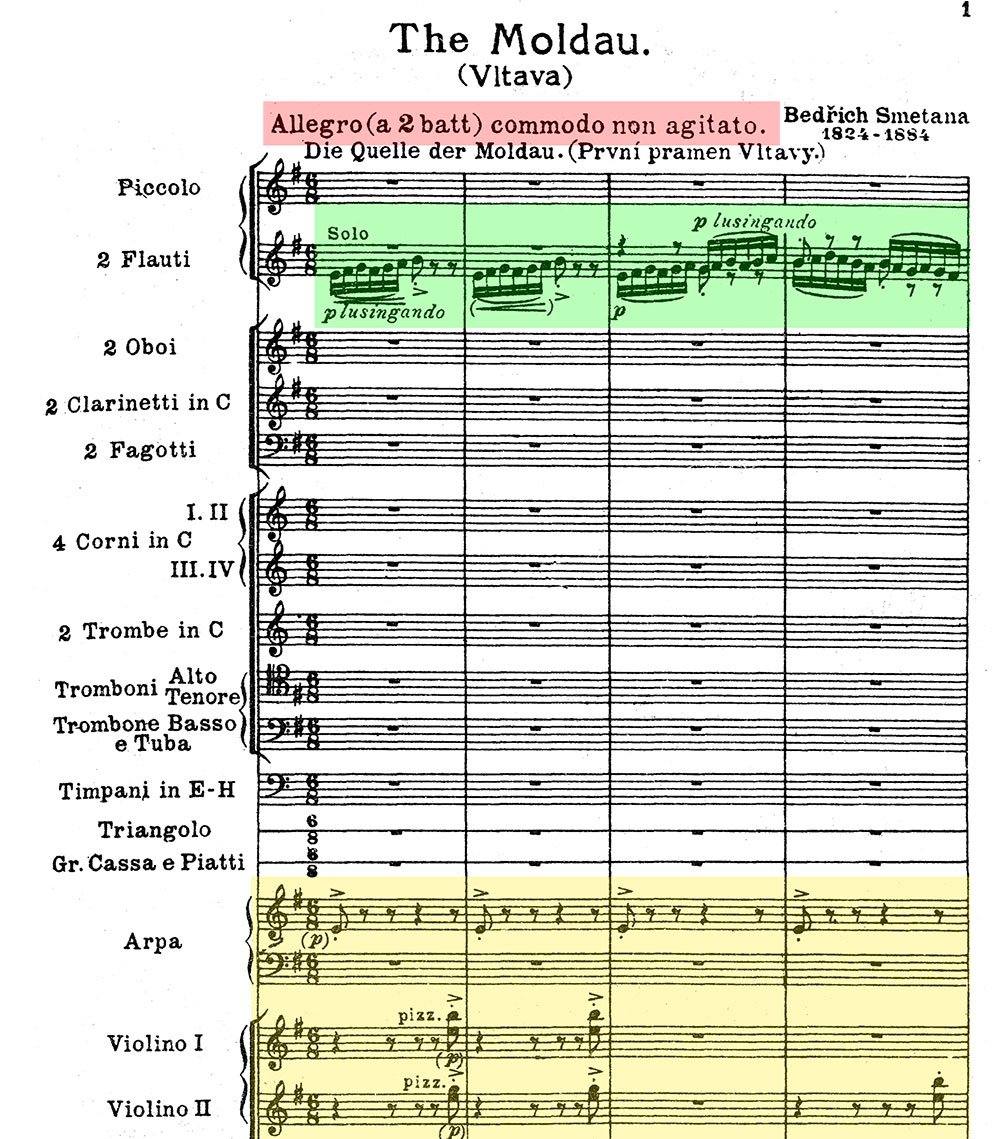 The second source appears with the clarinets, soon joined by the violas. The way these water lines are depicted in music, tailing and interlacing each other, is fantastic: the 2 springs join and run away from each other.

The orchestration gradually thickens: look at the pedal of the violas on bar 24, turning into 16th notes a few bars later.

The undulating motive of the 2 sources is passed to the second violins, violas, and cellos, on top of which the main theme comes in played by the violins. 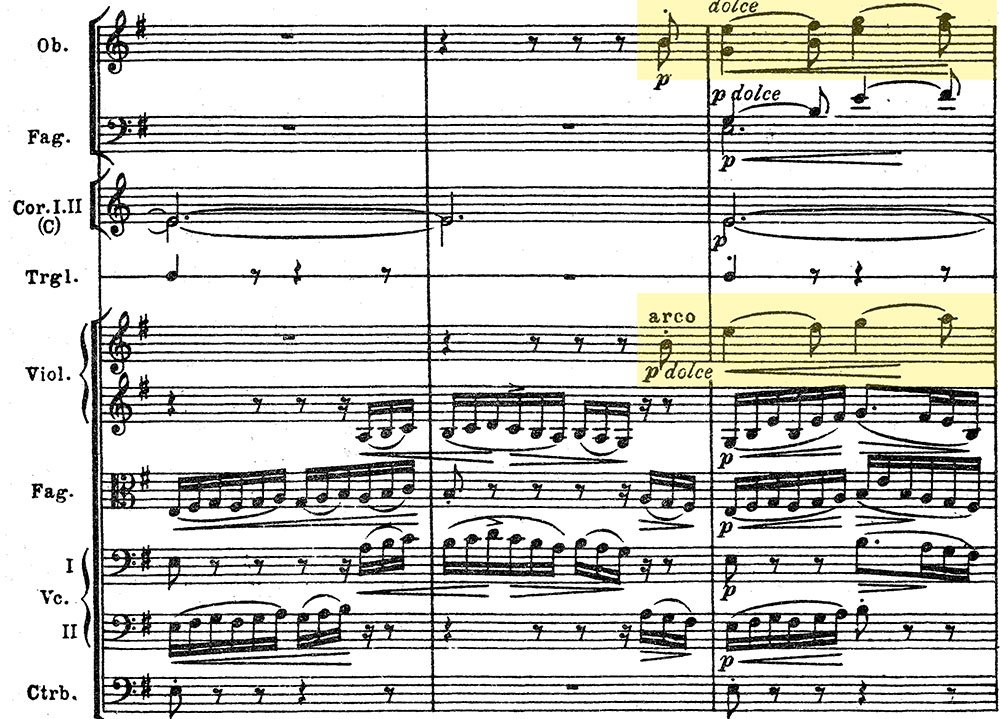 Take a look at the amount of information written out in the score. Triangle: elegant; violins, violas, and cellos: lusingando (alluring); second violins: ondeggiante (undulating). The dynamic is piano with small swells. We’re still at the beginning of the piece and over-conducting this part will exaggerate the turmoil taking away the effect coming up later.

A very elegant and non-invasive way of conducting this is by using your left hand to register the line, pulsing every 2 bars. Given the register, baton placement is clearly at waist level, and you can mimic the undulating movement of the music by moving away and towards your body. 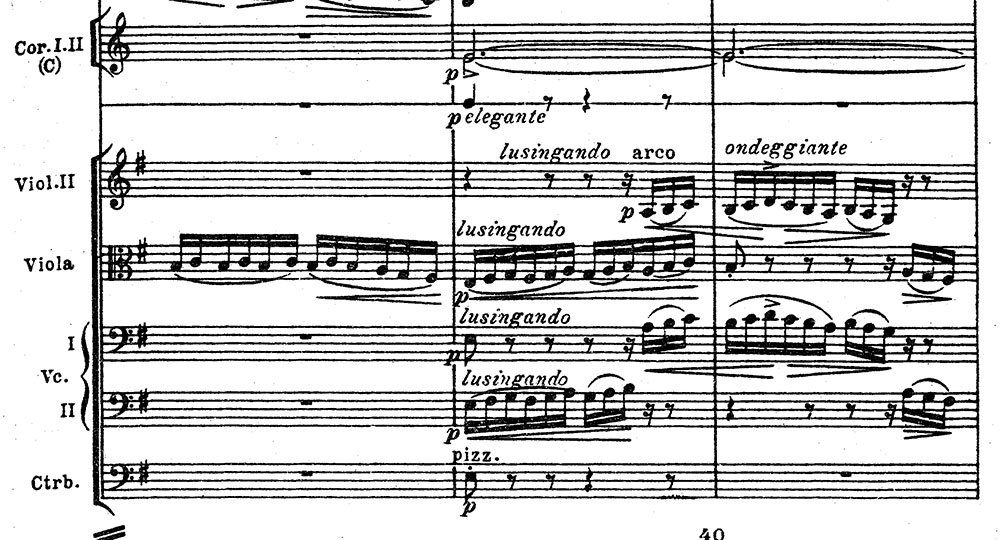 Do you want to dive deeper into the history of Vltava and the interconnections with the other movements of Má vlast? Check out the bonus episode!