One word on the title word to begin with: in many editions, you will find the word “Menuetto” at the top. Although widely accepted, this is incorrect: the Italian word is “Minuetto“. “Menuetto” derives from the Italian ending of the word added to the German word “Menuet”. This, in turn, comes from the French word “menuet”, meaning tiny, small, short.

Etymological digression aside, this was one of the most common dance forms in France and found its rightful way in the Classical era symphonies. Minus Beethoven, who, as we know, proceeded to use a faster version, called Scherzo (which literally means joke).

From a structural point of view, it’s a typical rounded binary form: AABB1. Though Haydn reserves us a few surprises.

The main phrase is clearly split into 2 4-bars blocks, played by the 1st violins doubled by the 1st flute and 1st oboe

Aside from the obvious, there are few things to notice on this first page: 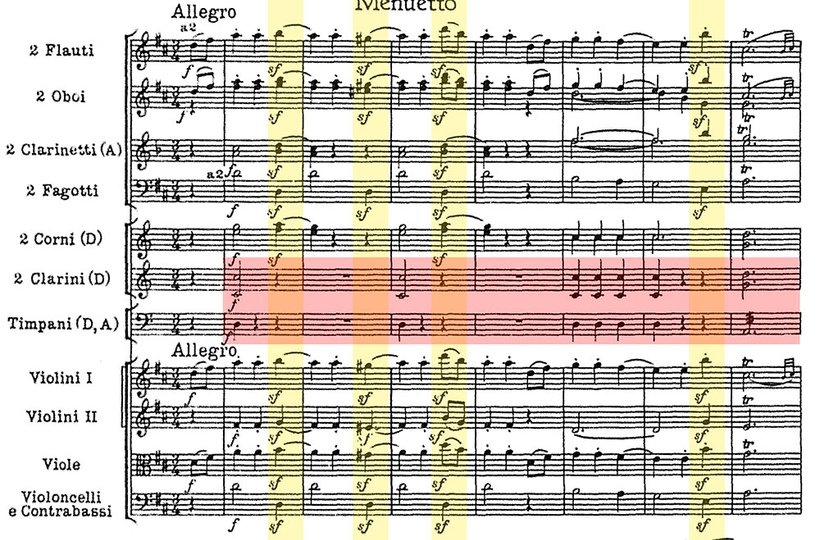 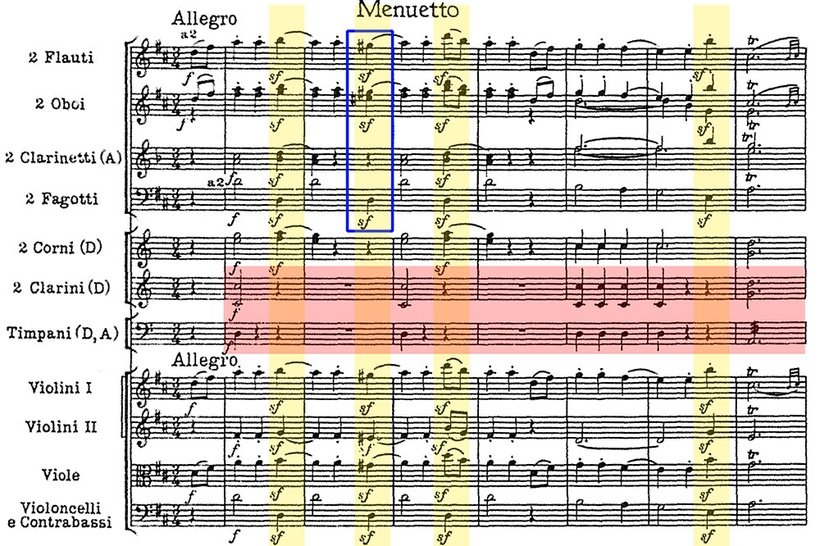 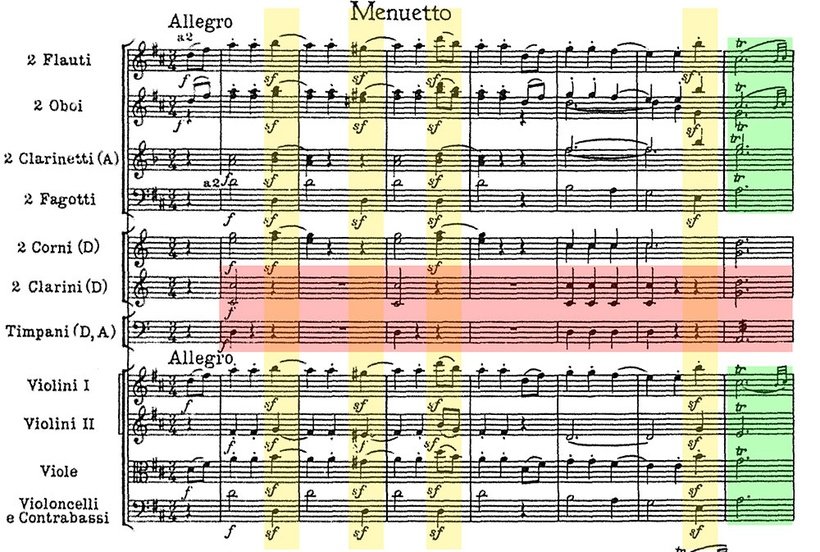 The movement starts with an anacrusis: from a technical point of view, all you need to do is to give a clear full pulse on the first unwritten beat. That is, of course, if you think this movement in 1 and not in 3. 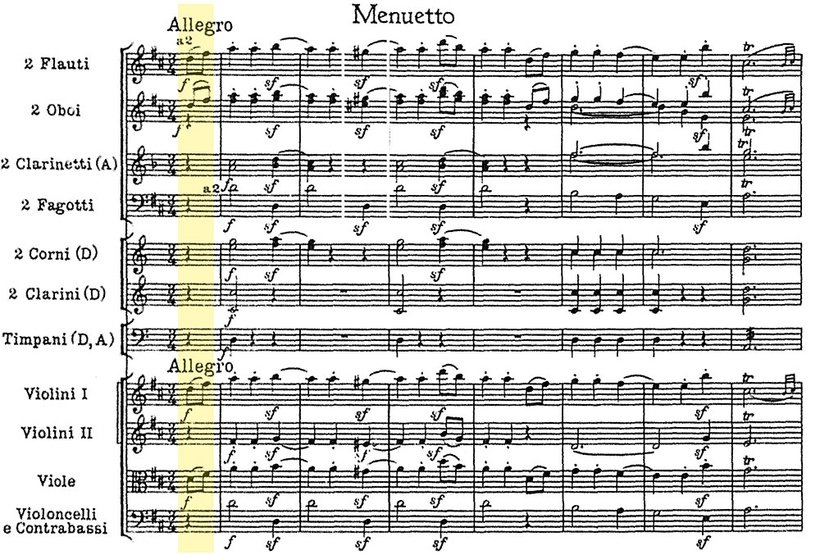 When repeating the phrase, Haydn makes a fundamental change: the scoring is much lighter. There are no trumpets or timpani; only 2 out of 8 woodwinds are playing; the sforzandi are gone; the dynamic drops; and while the articulation of the strings remains the same, the woodwinds are now playing legato. Haydn has created a huge contrast with a few changes in the orchestration 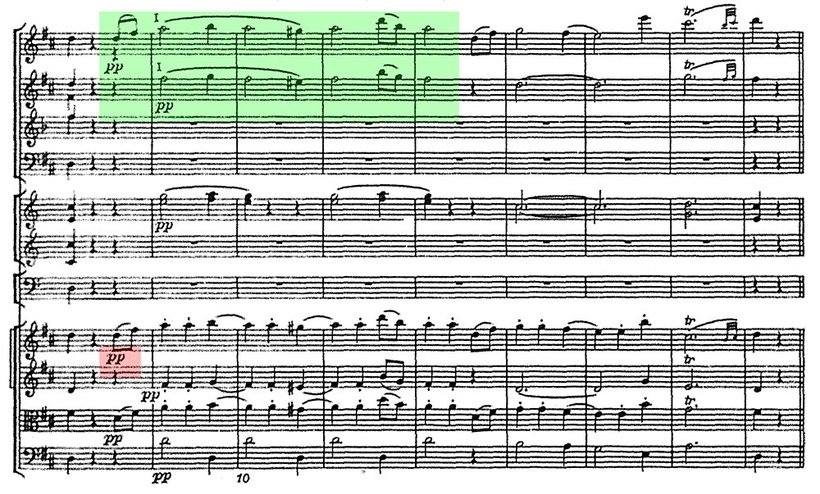 Notice the last 4 bars in both cases: the chord sequence strongly reminds of the first movement (see bar 32)

There’s one more thing: no modulation has happened in this A section. When we move on, Haydn quickly changes to B minor

Then uses the hemiola to charge the rhythm

And look at what happens right after it: on a pedal of A in the horns, Haydn adds a G natural, hinting towards the return of D major with a dominant seventh chord incomplete of its third (the C#). 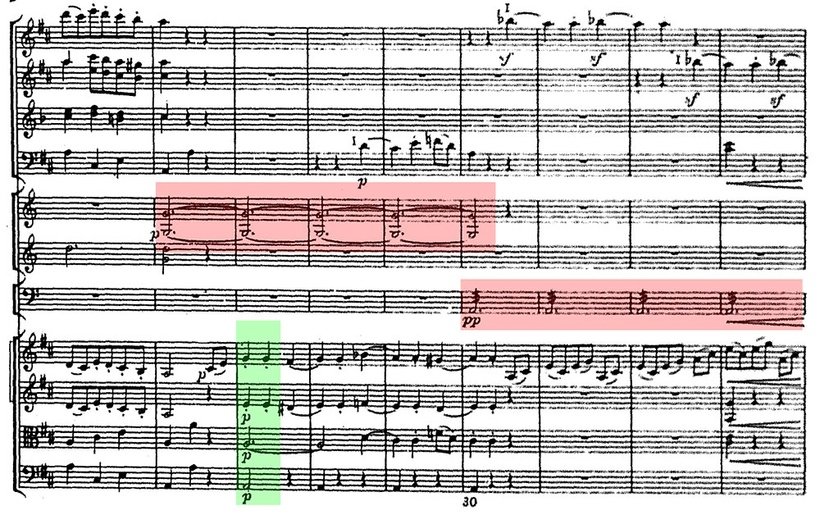 But wait: that same chord turns into a Neapolitan 6 chord on D-F-Bb the bar after that: this Neapolitan chord is built within the A major key and correctly resolves on it, followed by a diminished chord. 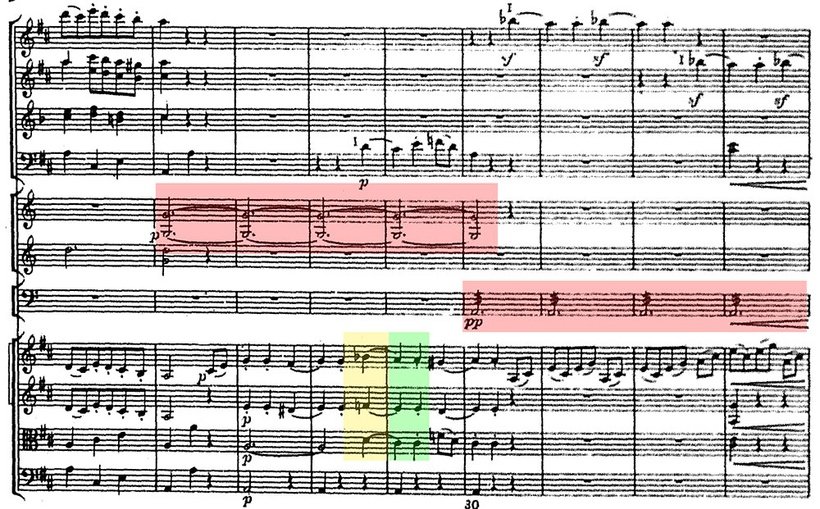 After that, we’re back on a A dominant 7th, to which a flat 9 is added. 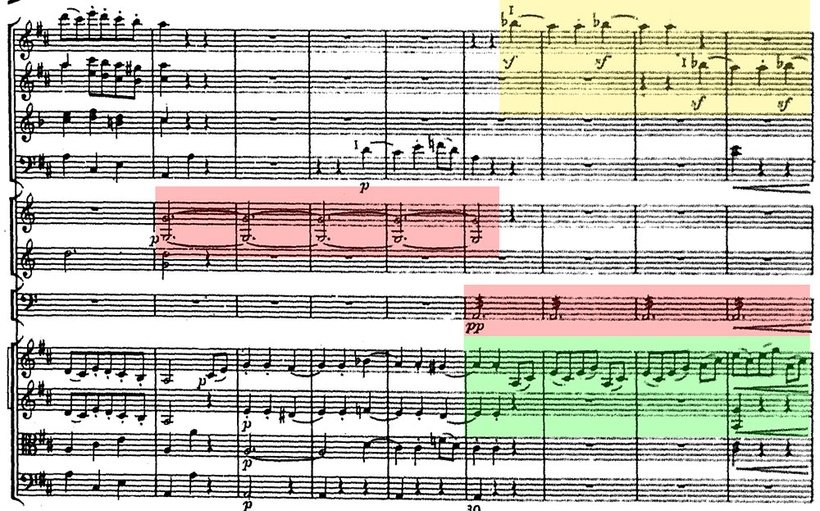 And finally, we are back to the D major. Haydn repeats the opening, slightly variated. But remember the trill we mentioned earlier? He uses it to create a bridge to the end of this first part. The orchestra stops playing for 2 full bars, creating drama 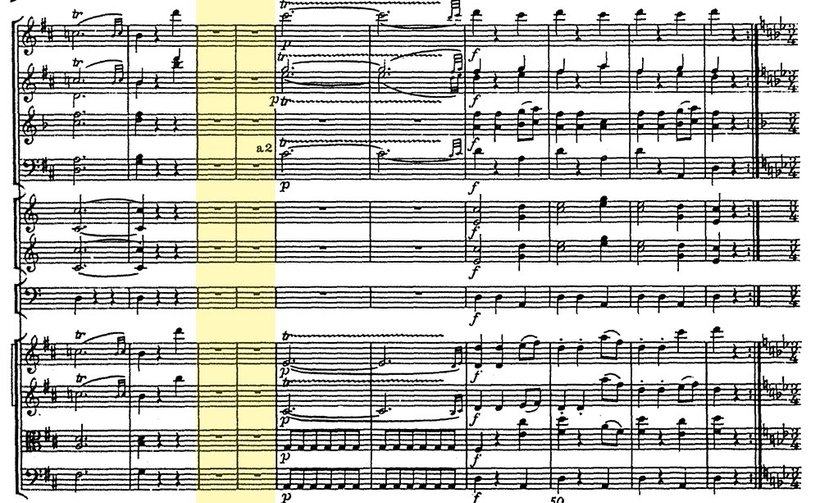 and then we move to the end.

Moving to the Trio, we’re going into the foreign key of Bb major, starting with a common note between the 2 keys: the D. It seems like quite a tentative start: in fact, the first 2 bars are unaccompanied to ease the change of key. The entire trio is mellower and lighter in orchestration: no brass or timpani, and no clarinets either. 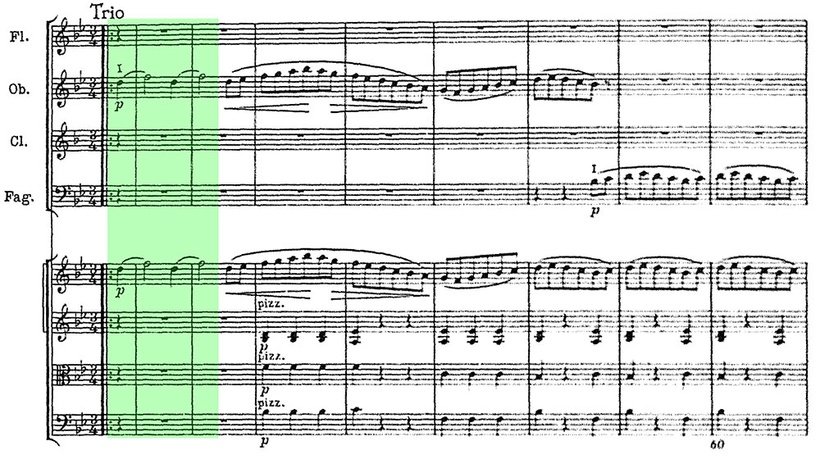 The melody is played out by the 1st violins and the oboe at first, while the rest of the strings play delicate pizzicatos underneath. 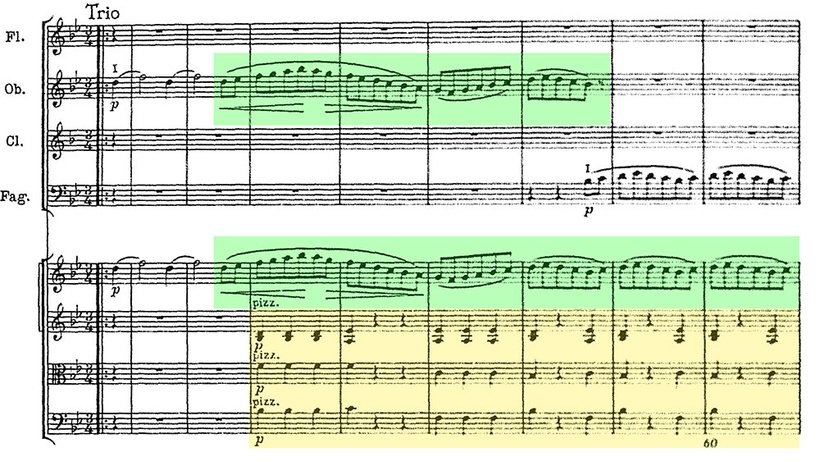 In the second part of the phrase, the oboe is replaced by the bassoon. Compared to the opening of the movement, this section has much less stress on the downbeat, with these flowing eight notes: technically speaking, you can show this by partially registering the line and rounding your gestures according to the music. When you do a round gesture, remember to pulse where it’s needed. 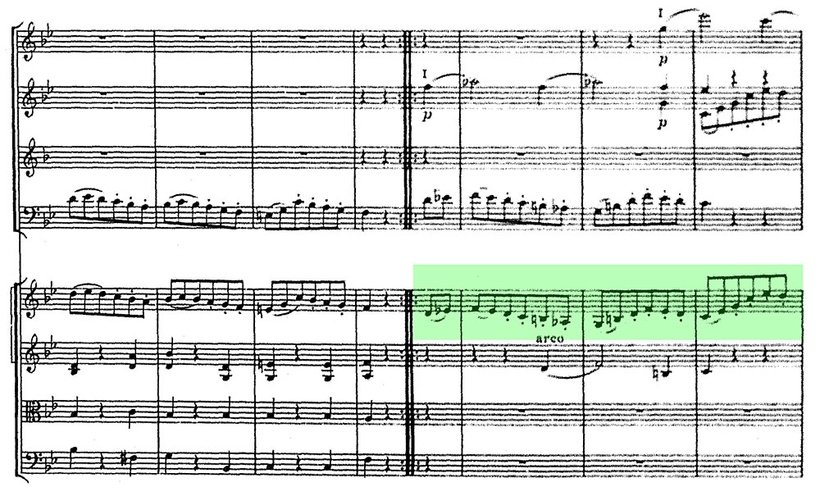 The eight notes become a counterpoint, while those 2 tentative notes played at the beginning of the trio acquire more importance, and are now played by the oboe and the flute.

Haydn makes use once again of the silence as drama (something that by the way, Mozart knew very well too) to end the section 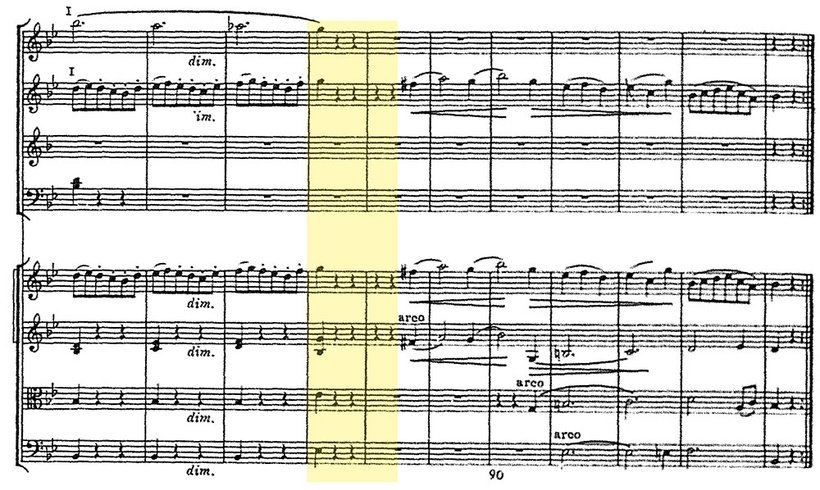 However, given the foreign key of the trio, he needed something more to bridge back to the D major: those famous 2 notes are reused again and morph into a chromatic passage, moving from Bb to A. 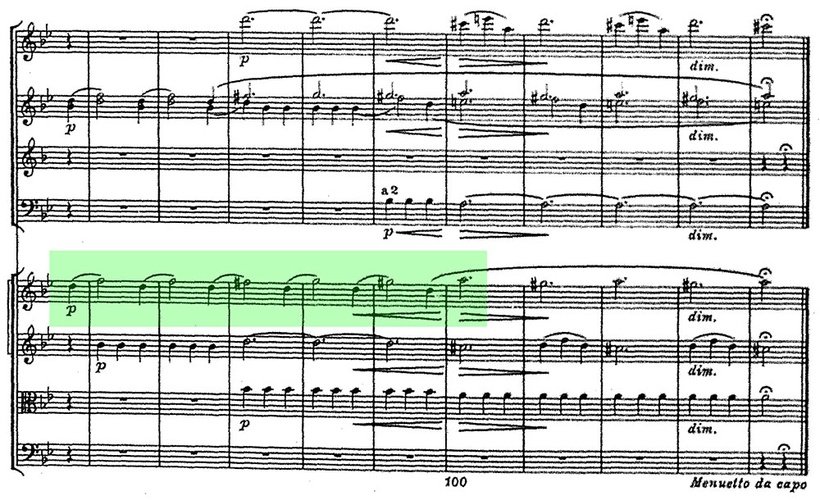 And on an A major chord (dominant of D), the trio ends, ready to go back to the opening D major. 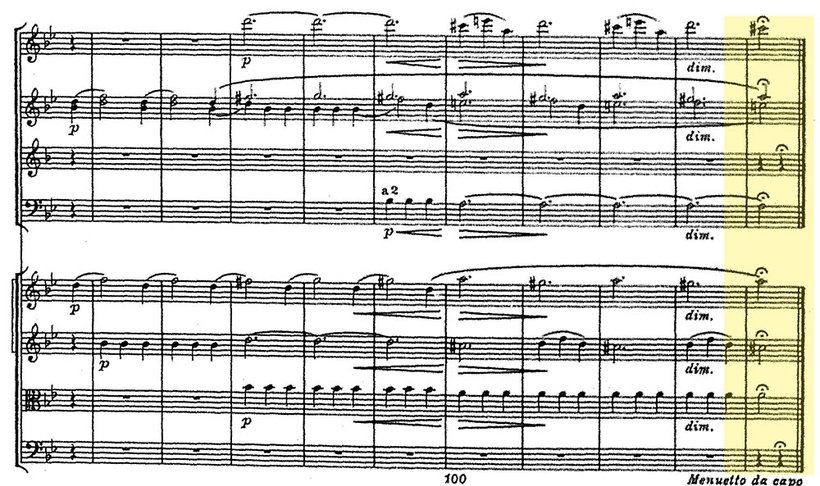 Previous Module
Back to Course
Next Module