Around the time he was in Düsseldorf for his new conducting position, Schumann gave birth to one of his most popular works. Being in Eb major with a beginning in ¾ , the symphony immediately calls for a comparison with the titan of music, Beethoven with his 3rd symphony.

Quite a common and obvious fact: every composer of the 1800s measured himself up to Beethoven when it came to symphonic music, from Schubert to Schumann to Brahms to Mahler. Some, like Brahms and Schubert, often second-guessed themselves: Brahms took some 17 years to write his first symphony. Schumann, on the other hand, took the bull by the horns and wrote his symphony in roughly 5 weeks, between November and December 1850.

The symphony premiered on February 6th, 1851 in Düsseldorf, conducted by Schumann himself, and was received with mixed reviews, “ranging from praise without qualification to bewilderment“. However, according to Peter A. Brown, members of the audience applauded between every movement, and especially at the end of the work when the orchestra joined them in congratulating Schumann by shouting “hurrah!“. [1]

Schumann’s symphony n.3 consists of 5 movements, departing from the usual four, quite an unusual choice for the time; but then again Beethoven (with his sixth symphony in this case) was omnipresent in Schumann’s mind. And yet, Schumann manages to create something new: new colors, new orchestration, new conception of the overall structure.

The first theme is clearly conceived for an orchestral canvas and apt to a large symphonic painting: it keeps going, flowing in and out of rhythmic ambiguities, which make the music sound sometimes in 3, sometimes in 2, all within a 4-bar phrase structure.

The theme ends with this small coda, which will be reused later on in the movement.

Moving on, the theme Schumann repeats the theme again, this time with the horns taking the lead

Less heroic and more melancholic is the second theme, which, again, starts with an interval of descending fourth, first introduced by the woodwinds, then the strings.

The shadows do not last long however and the urgency intrinsic to the first theme rapidly bursts in lead by a trumpet call.

This is a typical sonata form by the way: a first theme followed by a second contrasting theme, forming the big blocks of the exposition; then comes the development section. What Schumann does though, is to use the material in constantly evolving ways: the first theme morphs from heroic into a darker mood, and it’s at times used simply as a connecting tissue.

And then it becomes the generating cell for this great moment leading to the recapitulation: the horns blast out in a forte marcato dynamic while the strings play tremolo in pianissimo. 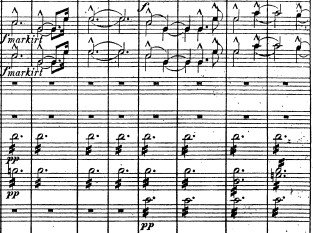 The movement ends with quite an extensive coda, marked by contrasting moments, especially on the dynamic level. The horns and trumpet take the lead again and the opening heroic character closes the movement.

The following Scherzo, taking up on Beethoven’s 9th symphony which broke the pattern of a slow movement following the opening movement, is again centered around the perfect fourth interval. It was originally titled “Morning on the Rhine“, a reference that Schumann himself took out.

It’s not a fast paced movement: based on a ländler (a dance popular in Austria and southern Germany), it lightens up the fights of the previous movement, but it retains a certain weight, as the tempo marking suggests (Sehr mässig).

Ideas flow in Schumann’s mind and a small scale – which by the way is kicked off by a perfect fourth interval again – is used first on its own:

and then as counterpoint to the main theme:

A chorale, played by the woodwinds and the horns, combined with the short notes motive, form the idea for the trio. 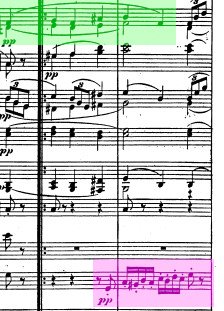 After the trio, the passionate rush of the first movement is back once again for a few bars. Notice how the triplet from the previous section is integrated in this one

The call from the horns, bassoons, and violas, a toned-down echo of the first movement, leads to a peaceful end.

The first theme reappears one more time and the piece ends with the same perfect fourth with which it started. 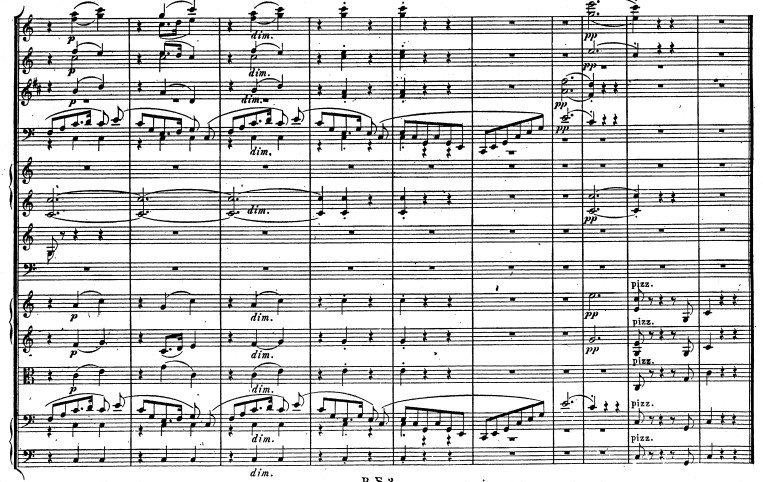 Despite it being a merry dance in C major, I never thought of this movement as light-hearted: rather, it gives me idea of the hero from the previous movement resting before another fight, the thoughts of what’s to come pressing in the back of his mind.

The central part of the symphony is a lovely intermezzo, almost an island, splitting the two two-movements blocks that create the head and the tail of the symphony.

It’s a delicate miniature, much like some of his solo piano works. The violas flow lightly under the clarinets and bassoons for the first phrase,

after which a chromatic idea of 5 notes, played by the violins, takes over,

turning into a playful game between winds and strings.

The third idea, an open scale going downwards and upwards, played by the violas and the bassoons

gets into the fabric of the movement, interlaced by the second idea and the flowing movements of the opening now handed to the cello solo, and subsequently leading back to the first theme. There are only 3 basic musical ideas in this movement but the way Schumann combines them and transforms them is magical!

Significantly, the interval of fourth comes back only towards the end, hidden in the horn line, in reverse compared to the opening theme of the first movement (Bb-Eb opposed to Eb-Bb).

The fourth movement is the most tragic Schumann. Built on a succession of fourth, it’s written in Eb minor, a key particularly close to the composer (see Manfred for example). A gash from the sforzato chord of the strings opens the door to the trombones

that in a somber, austere contrapuntal style darken, along with the french horns – and later the clarinets – the whole picture.

The entire movement is a development of the first two bars and it showcases Schumann’s abilities as an orchestrator: nearly every bar has something different, a color, a marking that show how unique he was.

An idea derived from the second movement and introduced by the clarinets and violas interrupts and intersects the syncopated rhythms:

This very same idea keeps growing and getting slightly transformed, adding more drama to the music by layering a contrasting texture:

until it fully takes over the accompaniment while the chorale returns, leading towards the end of the movement.

Woodwinds and brass climax with a fanfare-like moment

to which the strings answer in pianissimo

The movement ends in Eb minor with 3 bars in forte piano: the gash of the beginning is not there anymore, despair has left room only for annihilation. 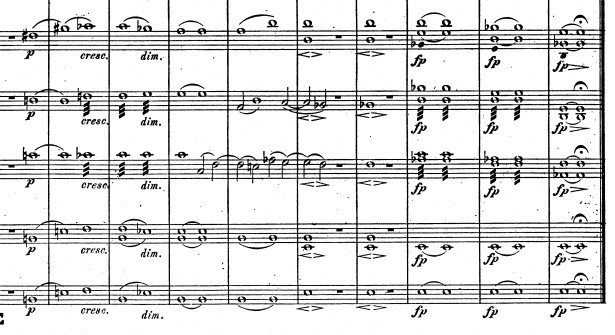 By the way, the story that Schumann was inspired for this movement while attending the investiture of a cardinal in the Cathedral of Cologne is just a story.

The last movement, as a perfect counterpart, leaves the depressed atmospheres for a more cheerful and upbeat dance. It begins with a forte dynamic but Schumann writes “dolce” next to it, the Italian word for sweet, in this case meaning something like “not aggressive”. Notice that there are no staccato markings in this part: 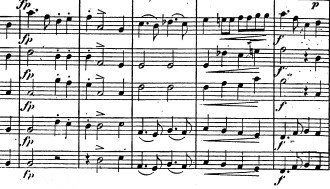 The interval of fourth is there again as well and a lot of ideas are shared from the previous movement, though reworked and approached with a completely different mood, much like Mahler will do in the last two movements of his fifth symphony.

After the quite extensive development, the first idea comes back, in a different form this time: Schumann drops the “dolce” marking and the strings are playing in tremolo. It’s a much more dynamic take:

Taking another page out of Beethoven’s book, Schumann develops a fantastic coda: it starts with a brass fanfare, to which the strings respond, and then join in.

And then the tragic theme from the fourth movement reappears, only to get swept away by the heroic and optimistic ending.

Schumann himself conducted the premiere in 1851. Three years later he was interned in a mental institution where he died in 1856 with his wife Clara at his bedside. Next to her was another music giant, Johannes Brahms.

Note: the title of the symphony, “Rhenish”, is not original, but was imposed by his publisher, as it so often happened in the 19th century. This symphony was published as his third symphony but it was, in fact, written after his fourth symphony.

And here’s the full symphony with L.Bernstein and the Wiener Philharmoniker